What is a Transducer

A transducer is a device which can convert a non-electrical physical quantity into an electrical signal, in other words, it can convert the energy of one to another. Energy forms can be mechanical, visual, aural, electrical, chemical… it can be used to change information into a form that can be easily transferred, stored, processed… a pressure transducer is a device which can be used to measure the pressure.

What are the types of electric pressure Transducer 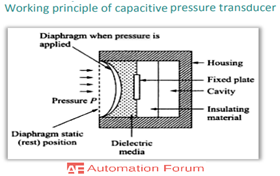 This is a passive type of resistance pressure transducer and its electrical resistance will change when it is stretched or compressed. A strain gauge is a wire which will change its resistance when mechanically strained, due to physical effects. Strain gauge is connected to the diaphragm and when the diaphragm flexes due to the applied pressure, the strain gauge will stretch or compress and because of this variation in its cross-sectional areas and its resistance will change due to this and this change is converted into voltage by linking two or four similar gauges similar to Wheatstone bridge so that the output can be maximized and reduces sensitivity to errors.

A potentiometer is made by winding resistance wire around an insulated cylinder. A movable electrical contact called a wiper slides along the cylinder, the motion of the wiper along with the resistive mechanism is used to detect the strain caused by applied pressure and the position of the wiper determines the resistance of the potentiometer which in turn determines the pressure.

Piezoelectricity is the ability of some materials mostly crystals to generate an electric potential in response to applied mechanical stress. In this transducer, the piezoelectric effect is used in certain materials such as quartz to generate rapid electrical signals and measuring the strain upon the sensing mechanism due to pressure. Common types of piezoelectric pressure transducers are charge mode type and low impedance voltage-mode type

It has good frequency response and no need for external power

Good article, I am learning about this product, it is very useful.