What is an encoder

Rotary encoder and its types

What is an optical encoder

An optical encoder is a device which can be used to monitor the direction of rotation, position or velocity of rotary or linear operating mechanism. This device mainly consists of four elements they are a light source, a light sensor, an optical disc, and signal conditioning circuitry. Mostly the light source is an LED that transmits infrared lights. A light sensor is a phototransistor which is more sensitive to infrared energy than to visible light. An optical disk is connected to the shaft being rotated so that they can rotate together. Mostly the disk is made up of plastic, glass, or metal it has opaque and translucent regions 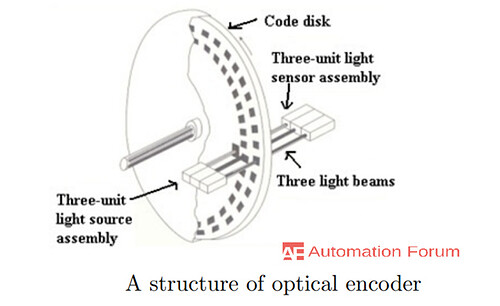 Optical encoders use an opaque disk which has one or more circular tasks with some arrangement of identical transparent windows a parallel beam of light is projected to all tracks from one side of the disk, the light sensor could be a silicon photodiode, phototransistor, or a photovoltaic cell. When the light passes through the translucent segment and is block by the opaque area, as the disk is rotated and thus the encoder sends the pulse train signals. If we know the direction in which the disk is moving then one sensor or one channel signal is enough, but if we change the direction frequently then the direction must be measured and this can be done by adding another optical sensor with carefully placed in relation to the first, then we can detect the direction of motion in addition to speed 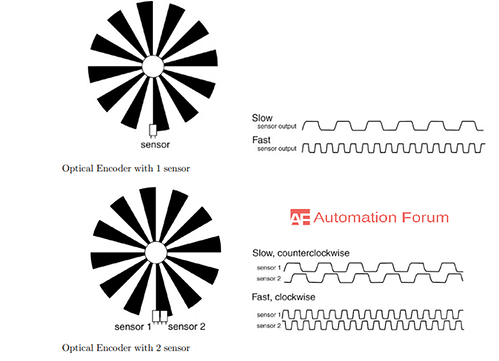 The quality of the encoder is measured by the number of slot per round called resolution, the higher the number of the slot the more precise the angular position can be measured and then the better encoder

Incremental encoder emits two pulses which can be used to determine the displacement and it has two channels which are positioned 90 degrees out of phase and the channels can be used to locate angular position and direction and also can calculate the angular velocity. The disk has a single circular track with identical and equally spaced transparent windows and the area of the opaque region between adjacent windows is equal to the window area.

The optical encoder has many pulse tracks on its transducer disk. If the disk of the absolute encoder is rotated then several pulse train which is equal in a number of the tracks on the disk is generated. An absolute encoder can measure the position of the axis for a single rotation and the same axis will always produce the same reading and the output will be either gray code or binary.