Hall effect and its applications

What is hall effect 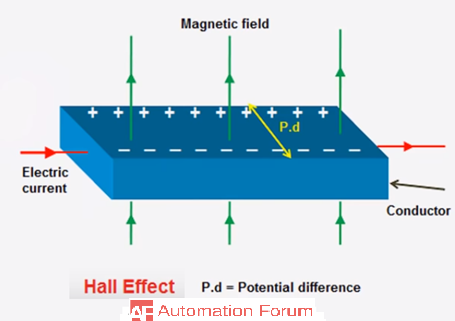 What is hall voltage

If a strip of conducting material carries a current in the presence of transverse magnetic field a potential difference will be produced between the opposite edges of the conductor and the electric field which is created by this will be perpendicular to both the current and magnetic field. The voltage or electric field produced due to the application of a magnetic field is called as hall voltage or hall field. Hall voltage is directly proportional to the current flow of the material, the magnetic field strength is inversely proportional to the mobile charges in the material and the thickness of the material, so if we need to produce large hall voltage we need to use thin material with few mobile charges per unit volume.

What is hall probe

It is a device which is used to measure the hall-voltage which subsequently gives the strength of a magnetic field. Conventional hall probes were constructed by using thin sheets of copper, nowadays it is constructed by using semiconductors like silicon and germanium to make it more sophisticated. Hall probe is inserted in the area where the magnetic field strength is to be determined and the hall probes give the value of the hall voltage across its two ends, then we can calculate the magnetic field strength.

I = current across the hall probe

B= magnetic field to be measured

n= charge density (no of charge carriers per unit volume)

d= thickness of the Hall probe

What is a quantum hall effect

The quantum hall effect is a quantum mechanical version of a hall effect. Which is observed in a two-dimensional system of electrons subjected to low temperatures and strong magnetic fields and these system doesn’t occur naturally but by using advanced technology and production techniques developed in semiconductor electronics. In the presence of large magnetic field strength and low temperature, the quantum hall effect can be observed, which is the quantization of the Hall resistance

What are the applications of hall-effect