What is a tachometer

A tachometer is an instrument which is used to measure the speed of an object or substance, it is also called as a revolution counter. Normal tachometer will be able to tell us how fast something is moving in a complete rotation. With the help of a microcontroller and some circuitry we can build our own digital tachometer. This device usually describes the revolution per minute on a calibrated analog dial or in a digital display. Tachometers in cars, aircraft or other vehicles show the rate of rotation of the engine crankshaft and there would be a marking that shows the safe range of rotation speed. Tachometers can indicate the angular speed of a rotating shaft.

What is the use of a tachometer

How does a tachometer works

Every engine spins within the limit of its design the pistons inside the engine pump the crankshaft to spin. This spinning crankshaft sends the horsepower. A tachometer counts the number of rotations the crankshaft is making in a minute. If the RPM of an engine is allowed to go above a specified range, moving parts will generate heat and friction to become damaged so by using a tachometer we could know the RPM of an engine and the engine can be operated at a specified range. There are many types of electrical tachometer the eddy current, or drag type is widely used in automobile speedometers. Electric generator tachometers work by generating either an alternating or direct current

What are the types of tachometers

It has a needle and dial type of interface and there is no provision for storage of readings, it cannot compute average deviation.

Digital tachometers are optical encoders which can determine the angular velocity of a rotating shaft or motor, digital tachometers can be used in many applications such as automobiles, medical and instrumentation equipment. The digital tachometer has an LCD or LED readout, memory is provided for storage and it can perform statistical functions like averaging. It works on the principle of a tachometer generator which means that when the motor is operated as a generator, it produces the voltage according to the velocity of the shaft. 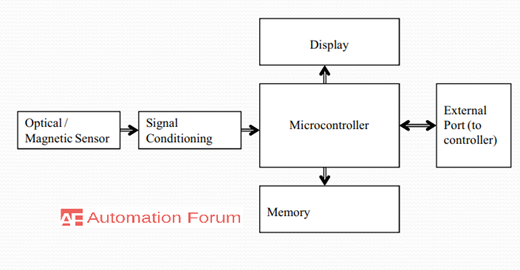 Digital tachometer consists of an optical sensor which generates pulses proportional to the speed of rotation. It counts the number of pulses sensed by the sensor and the number of pulses per second gives the rps and it will be multiplied by 60 to get RPM. Digital tachometers are capable to measure flow speeds at 0.5 rpm and high speed at 10000 pm.

How to choose a tachometer

A tachometer that does not need any physical contact with the rotating shaft is the non-contact digital tachometer. In this type, a laser or an optical disk is attached to the rotating shaft, and it can be read by an IR beam or laser, which is directed by the tachometer. Its measuring range is from 1 to 99,999 rpm the measurement angle is less than 120 degree and it has an LCD display. Non-contact tachometers are efficient and durable they are accurate and durable too. It is preferred where the tachometer needs to be mobile. 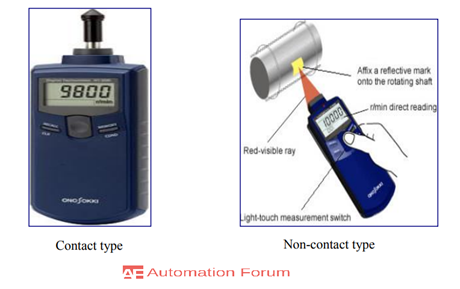 A tachometer that calculates the speed by measuring the time interval between incoming pulses is called as a time-based digital tachometer. It is accurate to measure low speed the reading time is depended on the speed and increases with a decrease in speed. Its resolution is independent of the speed of measurement.

A tachometer that calculates the speed by measuring the frequency of the pulses is called a frequency-based digital tachometer. It is more accurate for high-speed measurements, it’s reading time is independent of the speed of rotation and resolution is depended on the speed of the rotating shaft. These tachometers are of high efficiency and low cost.

It is a micro-electric machine which is used to convert the rotating speed and shaft values of a machine into an electric signal and is called as tachogenerator. It is based on the principle that the angular velocity of the rotor is proportional to the generated EMF if the excitation flux is constant. These are used as sensors in various automobile and electromechanical computer devices

What is electronic tachometer

A tachometer that is purely made of electronic components and is used to measure the speed of an engine or any other moving object in revolutions per minute is known as an electronic tachometer. These tachometers are lightweight and accurate under all conditions.

These tachometers are simply cable-driven meters that uses a magnet assembly with an attached needle or other indicators. The cable is driven from the camshaft or the distributor shaft and its other end turns the central assembly in the gauge. The magnet in the assembly exerts certain pull on the needles metal housing, causing the needle to move. Greater magnetic pull can be seen if the cable turns faster and the dial will show higher reading.

What is a stroboscope and how does it work