Tachometers are devices used to measure the rotational speed of an object in motion. Digital tachometers are efficient and accurate compared to the conventional analogue tachometer.

Digital tachometers, or to give them their proper title, digital tachometric generators, are usually non-contact instruments that sense the passage of equally spaced marks on the surface of a rotating disc or shaft. Measurement resolution is governed by the number of marks around the circumference.

Various types of sensor are used, such as optical, inductive and magnetic ones in the digital tachometer. As each mark is sensed, a pulse is generated and input to an electronic pulse counter. The velocity of the rotating object is proportional to the number of pulses per second.

There are a different sensor technologies used to measure the rotation.

Digital tachometers with optical sensors are often known as optical tachometers. Optical pulses can be generated by one of the two alternative photoelectric techniques, one the pulses are produced as the windows in a slotted disc pass in sequence between a light source and a detector.

The other method has both light source and detector mounted on the same side of a reflective disc which has black sectors painted onto it at regular angular intervals. 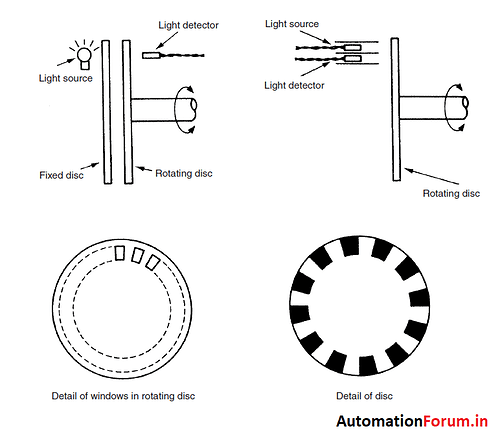 Light sources are normally either lasers or LEDs, with photodiodes and phototransistors being used as detectors. Optical tachometers yield better accuracy than other forms of digital tachometer but are not as reliable because dust and dirt can block light paths.

Variable reluctance velocity transducers, also known as induction tachometers, are a form of digital tachometer that use inductive sensing. They are widely used in the automotive industry within anti-skid devices, anti-lock braking systems (ABS) and traction control. 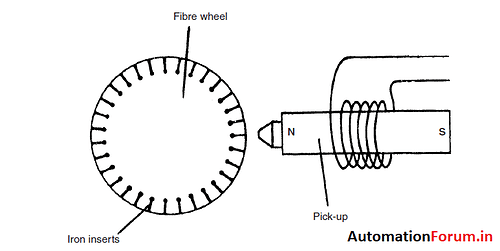 Inductive tachometer has a rotating disc that is constructed from a bonded-fibre material into which soft iron poles are inserted at regular intervals around its periphery. The sensor consists of a permanent magnet with a shaped pole piece, which carries a wound coil. The distance between the pick-up and the outer perimeter of the disc is around 0.5 mm.

As the disc rotates, the soft iron inserts on the disc move in turn past the pick-up unit. As each iron insert moves towards the pole piece, the reluctance of the magnetic circuit increases and hence the flux in the pole piece also increases

The changing magnetic flux inside the pick-up coil causes a voltage to be induced in the coil whose magnitude is proportional to the rate of change of flux.This voltage is positive whilst the flux is increasing and negative whilst it is decreasing.

Thus, the output is a sequence of positive and negative pulses whose frequency is proportional to the rotational velocity of the disc.

The rotating element in Hall-effect or magnetostrictive tachometers has a very simple design in the form of a toothed metal gearwheel. The sensor is a solid-state, Hall-effect device that is placed between the gear wheel and a permanent magnet.