What is MCCB and the advantages of MCCB?

MCCB stands for Moulded Case Circuit Breaker. It is a switching device that is designed to protect electrical devices from overload and short circuits. Fault sensing arrangements are installed inside MCCBs and shunt release is provided for remote tripping of MCB. 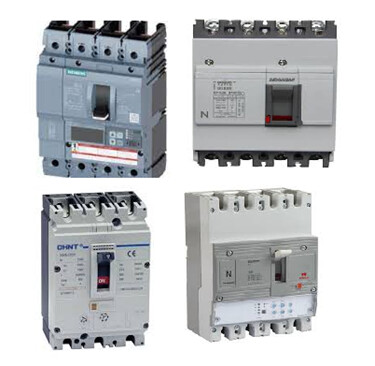 This device helps the MCCB to trip down for protection and isolation purposes. This enables the MCCB to provide:

The MCCB provides overload protection by using temperature-sensitive elements. This component is essentially a bimetallic contact, which is a contact made up of two metals that expand at different rates when subjected to high temperatures. The bimetallic contact allows the flow of electric current via the MCCB during normal operating conditions. The bimetallic contact will bend away and start to heat due to the physical properties of the metal when the flow of current exceeds the trip value. The contact will eventually bend to the point where it physically presses on the trip bar, unlocking the contact and stopping the circuit.

Manual current disconnection features are also available in MCCBs along with the tripping mechanisms. An arc will be created when the contact opens.

How MCCB is made?

MCCB consists of 9 different parts such

It is a stack of parallel metal plates that are mutually insulated and used to divide the arc that forms in the circuit breaker’s molded case. The arc chute is made of steel and glass fiber.

As a moving contact, an electrolyzed brass substance is used. The moving contact’s MOC (Material of Construction) should be strong arc resistance, corrosion resistance, low resistivity, and so on. The MOC determines the MCCB’s lifespan.

It covers the process of opening and closing contacts. The speed of the actuating mechanism does not depend on the speed of movement of the handle. These are called quick-create and fast-break.

It is connected to the working mechanism of the relay.

Glass fiber reinforced thermosetting polymer closure assemblies were mainly used as the bottom cover of molded case circuit breakers. This provides better mechanical strength. All parts of the MCCB are mounted inside this cover.

It is a bolt assembly made up of steel material. It is designed to make connections between the external circuit to the MCCB. It will make sure there is no loose contact between the terminals.

A handle knob is used to open and close the contacts manually. It won’t allow the user to stop the breaker from tripping by holding the knob at the top side and this technique is called a free trip.

The handle knob shows whether the breaker is in ON or OFF condition.

The red button associated with the actuation mechanism is called the manual override (trip) button. It is mainly used to manually open circuit breakers for testing purposes.

What are replacements for MCCB?