MCB stands for Miniature Circuit Breaker. It is designed to switch off electrical circuits automatically if any fault occurs in circuits like overload, short circuits, etc. Traditionally, we used fuse to protect the device from the above-mentioned issues, and nowadays MCB replaced the fuse.

The MCB is an electromechanical device that protects the electric wires and electrical load against overload and short circuits, etc. MCB is easy to use and we can quickly restore the power supply.

MCB has a very less maintenance cost. The working of MCB is based upon a bi-metal respective concept that protects from overload current and short circuit issues.

How to calculate MCB rating for an application?

How MCB is made?

MCBs are mainly designed single-pole models for single-phase circuits. The MCBs are packed in a case made up of fire-resistant and high-strength plastics. Plastic gives a very high melting point, low water absorption, low thermal expansion, and high load deflection temperature. The machine is equipped with an arc chamber consisting of various arc chambers (metal plates) held by the position of insulating material. Since the arc chute stack does not always have to surround the contacts, some designs provide an arc chute to move the arc into the arc chute. The thermal shutoff mechanism consists of a thermomagnetic device in which the thermal effect is provided by a bimetallic plate and in some cases a heater. The locking mechanism is activated by the deflection of the bimetallic strip. Therefore, the properties of bimetallic plates provide a certain delay in case of overload or short-circuit current. Low-resistance bimetals are used in high-current circuit breakers, and high-resistance bimetals are used in low-current circuit breakers. A heater can be placed around the bimetal to produce sufficient heat for very low current MCBs.

The magnetic release mechanism consists of a coil wound around a tube. This tube has a spring-loaded stem and movement of the stem activates the release mechanism. During high short circuit currents, the magnetic field generated by the coil overcomes the spring force holding the plug in place. Thus, the movement of the bullet activates the trigger. The coil consists of thin wire with more turns for low-rated circuit breakers and thicker wire with fewer turns for high-temperature circuit breakers. Depending on the required characteristics, the magnetic release is set by the manufacturer.

It protects from overload

In both small and large-scale companies, MCBs can provide a reliable safety system.

How Does a Circuit Breaker Work? 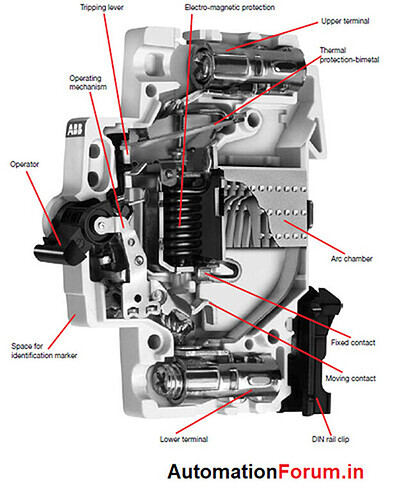 What are replacements for MCB

Fuse, MCCB, RCCB, ELCB are the main alternatives of MCB

What is MCCB and the advantages of MCCB?
FUSE VS MCB VS MCCB VS ELCB