What is a fuse?

Fuse is an electrical device that is designed as a current interrupting device that opens or breaks the circuit by fusing the element in the circuit when current exceeds a certain value.

A fuse is an automated device that disconnects electricity from a malfunctioning system; it’s typically abbreviated to ADS (Automatic Disconnection of Supply). Circuit breakers can be used in place of fuses, but they have distinct advantages and disadvantages. 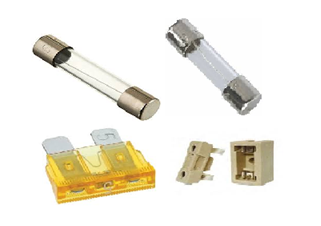 The working of the fuse is based upon the heating effect of the current. The fuse is made up of a thin strip of metallic wire with non-combustible material. The fuse is always in series with the electrical circuit.

When an excessive current or heat is generated due to the heavy current flowing through the circuit, the metals in the fuse melt and the circuit is opened. Excessive current flow can cause the wire to break and the current to stop flowing. The fuse can be replaced with a new one that has the appropriate rating. Zinc, copper, silver, and aluminum can be used to make the fuse. They also serve as a circuit breaker, allowing the circuit to be broken in the event of a sudden breakdown. This serves as both a protector and a safety precaution to keep humans safe from harm. So that’s how the fuse works. Fuse operation, fuse barrel (container), and fuse link are depicted in this diagram.

Why fuse was invented?

Thomas Alva Edison invented the fuse in 1980. To protect telegraph lines and lightning installations before the advent of the electrical fuse, a variety of wires or foil fusible materials were utilized.

The use of reduced-section conductors to shield telegraph stations from lightning strikes was suggested by a French scientist, Louis-François-Clement Breguet; by melting, the thinner wires would protect apparatus and wiring inside the structure.

How to calculate Fuse rating for an application?

The main function of the fuse is to break if a current flow through a circuit is exceeding the allowed current limit.

Calculating the rating of a very basic protection equipment fuse, we use the thumb rule just select a fuse rated 150% - 200% of the normal operating current of the specific circuit.

There are various calculations are involved to find a suitable fuse rating.

Need to consider other factors such as temperature, available energy, inrush current, etc.

There are different types of fuses available in the market and are mainly classified into two types. They are

The size of DC fuses is bigger. Because the DC supply has a continuous value over 0V, it is difficult to ignore and turn off the circuit, and there is a risk of an electric arc between melted wires. To overcome this, electrodes are positioned at greater distances, causing the size of DC fuses to rise.

AC fuses are smaller in size. They can oscillate a minimum of 50 times to a maximum of 60 times in each and every second and it prevents the formation of Arc between the melted wires.

Formula to Calculate the Fuse Rating

For any device, there is a simple and basic formula for determining the fuse rating, voltage, or wattage:

P for power in Watts;

V for voltage in volt);

I for current in Amps.

The rating of the fuse is calculated by dividing the power used by the appliance by the voltage passing into the appliance.

Example of fuse rating calculation for a Motor

A machine’s fuse is rated according to the load it carries when it is turned on.

What is Fusing Factor?

The fusing factor is the ratio of the minimum fusing current to the fuse’s current rating.

As a result, the fusing factor equals the fuse’s minimum fusing current or current rating.

The fusing factor’s value is always greater than one.

Fuse Wire Rating: The melting point and specific resistance of some materials used for manufacturing fuses are listed below.

In general, the smaller the fuse, the lower the current and/or capability of the fuse or circuit breaker.

Furthermore, while the fuse may be smaller, the fuse holder may be somewhat larger, adding to the concern.

How to fuse is made?

Due to this, the fuse wire is made up of an alloy of Tin or Lead.

What is the purpose of Fuse?

Fuses are used to prevent the electrical components such as television, motor, grinder, etc from the short circuit and damage by overload or high current. If we do not utilize fuses, electrical failures occur in the wiring, causing the wire and electric equipment to burn and maybe start a fire. When the fuse blows, a sudden spark happens, which may cause the electrical supply failure, preventing any more mishaps. That is why we require fuses to protect electrical components.

How to check a bad fuse?

Step 1: Remove the equipment from the power supply and remove the fuse from its position

Step 3: Place any one of the leads of the Multimeter on one end of the fuse and place the other lead on the opposite side of the fuse. The fuse is good if the reading value is between 0 and 5 Ω. The higher value means the fuse is either bad or degraded.

Advantages and Disadvantages of Fuse

What are the replacements for the fuse?

MCB, MCCB and ELCB, etc are the main alternatives for fuse