Measuring systems have become a integral part in human existence. And since the dawn of the electronics age with prevalence of computers that are interactive, real time sensing has been the norm for an intuitive system. With ever-increasing demand for electronics that gets smaller and smarter every day, the opportunities to develop compact high efficient sensors and actuators have risen exponentially. Miniaturization of the measurement systems and incorporation of signal processing elements with relevant actuating system is termed as Micro electro mechanical system. 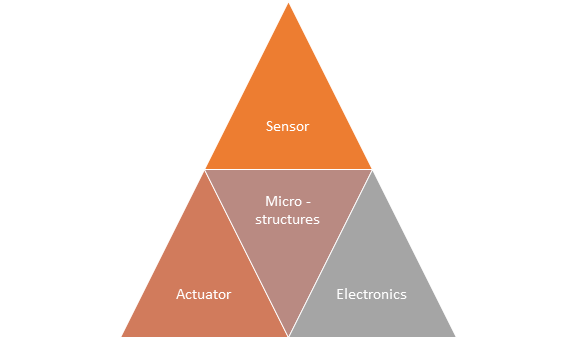 image576×339 4.01 KB
These include detection of motion, force, fluid flow, pressure, temperature, heat etc that regular sensors are designed to do.

With the event of multi device integration and development of IoT, The market for MEMS is potentially rising. Though it is a developing field, there are quite a hand full of commercial applications available in the market at present.

These MEMS devices use the same operation principles that we are familiar with. They do have 3-dimensional delicate structure development; MEMS fabrication is based on the tried and tested IC (integrated chips) fabrication. Batch processing of MEMS structure does decrease the cost per device, it is wrought with structural failure especially with movable actuator components.

Most MEMS devices can not be strictly classified as there is always correlation between systems, some basic classifications can be arrived at.

SQUIDS - superconducting quantum interference devices are the most common magnetic sensors in MEMS that can detect small magnetic flux in the heart and brain tissues due to electric pulses generated in them.

While Solenoids, and other 3D coils are used in the macroscale as magnetic actuators, it is difficult to mimic these structures in the microscale due to fabrication constraints.

The devices need direct physical contact with the measurand which can be in anyone of the phases (solid, liquid or gas). The direct chemical reaction between the constituents give an appropriate electric signal that is indicative of the reaction. They use a variety of principles for operation. Some of which can be grouped as below.

These are based on MOSFET (Metal oxide Semiconductor Field Effect Transducer) which can act as switches where the MOSETS turn on or off and the current flow in them depends on the Gate voltage applied. MOSFETS are also very sensitive to the impurities present in between their junctions.

The design of MOSFETS include a Silicon substrate which is doped followed by deposition of source and drain region which is also silicon doped. The source and drain are over the Silicon substrate separated by a gap of insulating layer over which an electrical contact is established which is the gate. The flow of electron in the system is dependent on the channel that forms at the silicon substrate close to the insulator layer which is depended on the metal contact gate (Think Capacitor like) . Such system can be very sensitive to any impurities on its surface which can lead to change in its workfunction. This phenomenon is exploited by the ISFET where instead of a gate, the device is in direct contact with the analyte and the current flow is depended on the potential of the electrolyte (analyte environment) and the insulator. 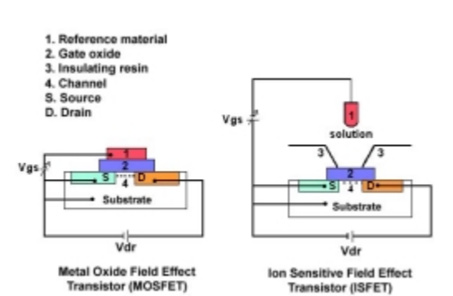 This is one instance where the underlying principle and applications get blurred because microfluidics are used in one way or the other for many different applications. Chemical analysis, drug delivery, biological sensing, environmental monitoring and many other applications typically incorporate MEMS microfluidic devices.

The design of these systems depends on the type of flow (Turbulent or laminar), capillary forces, fluid resistance and capacitance, bubble formation and cracking.

The last three are in various developmental stages.

Instrument selection for flow measurement based on application