The thermoelectric effect is phenomenon exhibited by thermocouple that convert temperature differences to electric voltage and vice versa. A thermocouple is an electrical device with two dissimilar conductors forming electrical junctions at differing temperatures. The electrical output of which is an directly proportional to the temperature sensed.

A thermocouple is a type of active transducer that do not require an external power supply.This is because at the atomic level, the materials exhibiting thermoelectric effect have charge carriers in the material that diffuse from the hot side to the cold side.

Thermoelectric effect can be classifeid into three differerent effects which are more or less related to each other. They are Seebeck effect , Peltier effect , and Thomson effect .

The Seebeck effect is the production of EMF (electromotive force) at the junctions of two different conductors. Two dissimilar materials connected back to back at two different temperatures TH (hot) and TC (Cold)generates an EMF (V) across their junction 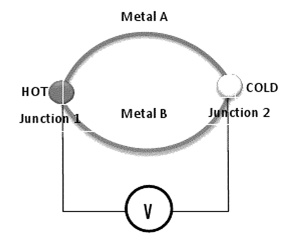 The maginitude of thermo-electric emf , proportional to the temperature difference between the junctions,depends upon the nature of the two metals. and the direction of the thermoelectric current can be reversed by switching the hot and cold junctions.

Thermo-electric series It is a set of elements used in thermocouples and which participate in the Seebeck effect and Peltier effect. The series is as follows

Variation of thermo-emf with temperature 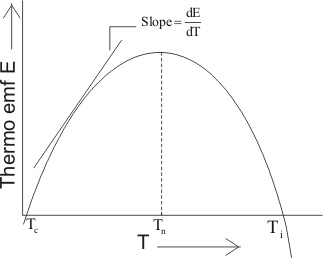 where T is the temperature difference between the two junction and α and β are the parameters of the material used The rate of change of thermo-emf with temperature i.e dE/dT is called thermo-power or seeback coefficent S .

1. Temperature Sensor , As a thermocouple they can sense temperatures by having one junction at a constant temperature and sensing through the other junction. More than one thermocouples are connected in series to form a thermopile which is very sensitive and can detect minute temperature differences.

When an electric current is passed through thermo-couple ,heat is evolved at one junction and absorbed at the other end i.e one end become hot while other become cold, essentially a reverse Seebeck effect. Being reversible, hot and cold junctions are determined by the current flow. 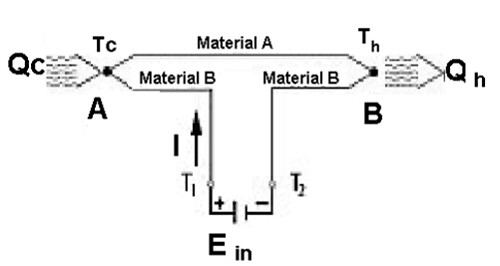 image501×267 17.8 KB
A simple thermocouple circuit when closed, will generate current by seebeck effect which drives the peltier effect to take place with heat transferred from hot to cold junction. This gives a direct relation ship between the Seebeck and Peltier coefficient ∏.

1. Thermoelectric cooling Construction: One n-type and one p-type semiconductors, with different electron densities are placed parallel to each other and connected electrically to be in series mounted on a thermally conducting plate on each side. When a voltage is applied to the free ends of the two semiconductors there is a flow of DC current across the junction of the semiconductors causing a temperature difference. The side with the cooling plate absorbs heat that is transferred to the other side into the heat sink at ambient temperature. More connections increases the cooling ability of the system. 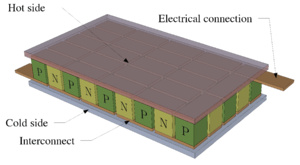 Identification of TECs Thermelectric cooling devices have specifications printed onto the cold side. 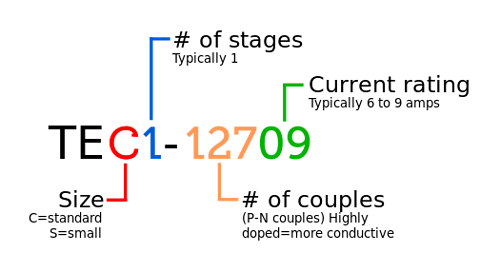 Similar in working to Seebeck effect, but here only one conductor is used.

According to this effect, if a conductor has placed in varying temperature along its length and current is passed through it then it will absorb or evolve heat which depends on the direction of the current flow. Basically heat evolves , ie the side becomes hotter, when current passes from high potential to lower potential. Depending on the material they exhibit either positive or negative thomson effect.

What is Thermoelectricity and how is it related to Peltier, Seebeck and Thomson effects
Micro Electro Mechanical Systems ( MEMS)