Strain gauges are resistance based passive electrical transducers that work on piezoresistive effect.

A change in length (l) or Cross sectional area (A) of the wire alters the resistance ®.

Consider a metal wire with length L and cross sectional area D with a force F applied on either ends.

The dimensions of the wire changes to L+∆L and D+∆D.

where v is poisson’s ratio and ρ is resistivity. (Approximation factors reduce the length and area to 1+2V.)

It is the change in resistivity of a material when mechanical strain is applied. While the effect of this in the material is negligible, the gauge factor becomes dependent only on geometric factors so it is; GF = 1+ 2V However, most commonly used strain gauges work on piezoresistivity , eg: Constantan is material where piezoresistivity is around 20% of the GF. For a video tutorial on derivation of gauge factor and its relation to poisson’s ratio click here

Strain gauges consist of very fine metallic wires that are arranged in a grid pattern attached to a flexible substrate called the carrier. The carrier is in close contact with the test subject so that any pressure on the subject translates to the movement of the carrier which in turn leads to compression or expansion of the metal wires. The foil is shaped as a grid to increase the area over which the forces act, giving a reliable output. These strain gauges are attached to arms of a Wheatstone bridge from which the voltage corresponding to the resistance change is measured. Depending on the design of the strain gauges they are classified into many types.

The wire is not completely bonded with the carrier. It consists of a fixed body and a movable part. Metal wires connect these two parts and the movable part is in contact with the specimen. 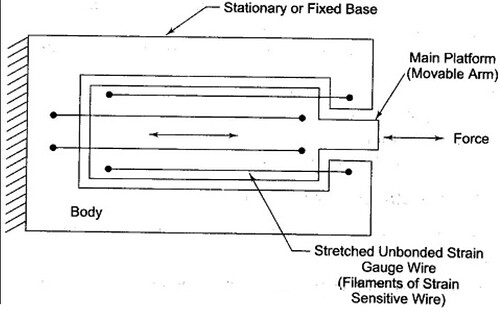 The metal wire is bonded to the carrier with epoxy. And the whole structure is attached to the specimen. 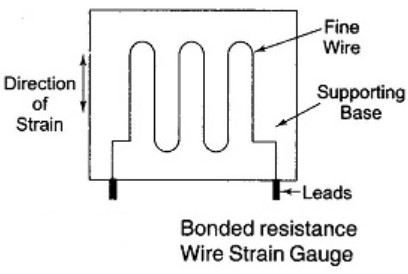 Disadvantages of bonded metal wire type strain gauge Susceptible to creep error. Since they are highly sensitive and directly bonded to the specimen, over time due to wear of the adhesive will reduce its accuracy.

Similar to the metal wire strain gauge, only foil is used in place of thin metallic wires. They are manufactured by photo-etching process. They can take different shapes rather than the comb like structure of the metal foil

Advantages of Thin film strain gauge Since there is molecular attachment, there is more stability and less susceptible to creep error.

Using deposition of semiconductors by semiconductor fabrication techniques of photo lithography and molecular beam epitaxy, they have high pezoresistive properties which means that the G.F is very high.

These are strain gauges that are designed to be multidirectional. Since unidirectional strain gauges can only measure the strain in the direction of its alignment, it does not provide detailed data.

These strain gauges are connected in star or delta connections.

Resistance of the material changes due to temperature in addition to the strain and geometrical factors discussed above. In that case, the resistance change is given as

In order to minimize the error due to temperature and creep, compensations are provided for the strain gauges when it is connected to the Wheatstone bridge.