Pressure , weight or force can be measured using a load cell which converts the mechanical force into electrical signal.

1.On Capacity: They have a wide range of applications and depending on the capacity of the load cell they are divided into three

Among them strain gauge type load cells are most commonly used,

Working on the principle of change in the dimension of the conductor changes the resistance. This is the most commonly used industrial load cell. Force in the form of weight, pressure when applied on the conductor causes compression or expansion resulting change in resistance which is measured using a Wheatstone bridge. The deformation thus formed is proportional to the applied force. Four strain gauges mounted on a structural element connected to a Wheatstone ridge is the construction of the strain gauge based load cell. The electrical signal output from the load cell is of the order of a few millivolts (mV) and hence needs an instrumentation amplifier for signal conditioning.

While two or three strain gauges per load cell can be used, four strain gauges provide temperature compensation ( since conductors are susceptible to change in resistance due to temperature) and increased accuracy.

Strain gauge based load cells are further classified as follows: 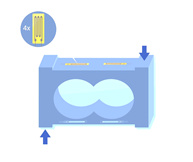 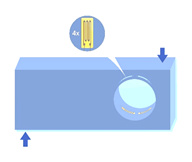 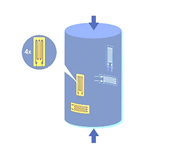 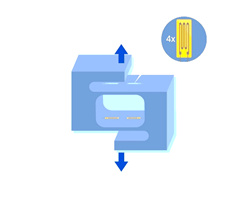 To read about strain gauges in detail click here

Working on the piezoelectric effect where deformation of piezoelectric materials like quartz generates a voltage across it proportional to the load applied. This is an active type of transducer wherein no external power supply is needed. Though it should be noted that the voltage formed is in impulses. Hence this can be exploited to sense dynamic loads where in there is a frequent change in the force applied. While strain gauges can only be used in static loads, where the load doesn’t change for a long period of time.

Working Principle It works on the principle that a liquid medium that is contained at a certain pressure and temperature will experience pressure when compressed by a external force. The difference in pressure of the medium is proportional to the applied load.

It is to be noted that the load cell is not in contact with the piston directly and mechanical stop restrict the diaphragm from being exerted with more force than its limit.

Operation of Hydraulic Load Cell The force to be measured is applied to the piston that moves the piston downwards and deflects the diaphragm increasing the pressure on the liquid medium proportional to the applied force. This is measured by the bourdon tube where the pressure is calibrated to unit of force. Hence the applied load is shown by the gauge.

Operation of the Pneumatic Load Cell Force applied to the top side of the diaphragm causes the diaphragm to deflect and the flapper to shut-off the nozzle opening. Now an air supply is provided at the bottom of the diaphragm. As the flapper closes the nozzle opening, a back pressure results underneath the diagram. This back presssure acts on the diaphragm producing an upward force. Air pressure is regulated until the diaphragm returns to the preloaded position which is indicated by air which comes out of the nozzle. At this stage, the corresponding pressure indicated by the pressure gauge becomes a measure of the applied force when calibrated. Measurable loads: upto 2.5*10^3 Kg Accuracy: 0.5 % of the full scale.

It utilizes a wire that is vibrating at a certain high frequency and application of load changes the frequency of vibration. This gives the load applied. Only used in geomechanical applications

Change in capacitance due to applied load.

All load cells undergo deformation in one kind or other during the course of operation. To accommodate this load cells should have a spring like operation so that it returns to its original state. But during sudden load changes this will cause the load cells to have a vibration which results in a oscillation in data points. This effect is called ringing. To counter this, a control system with actuator to restrict the vibration can be used. But this increases the system complexity.

Natural wear and tear of the load cell, in addition to misalignment, aging and drift from original position will effect the output. Hence every 18 months to 2 years load cells have to be calibrated. Linearity and repeat ability are the calibration guidelines that are focused on . For this a 5 step calibration method is used. Five known weights are used and the load cells are tested. The weights are added on and then removed to check for the repeatably of the load cell. Each set of ascending and descending weight s are performed at least 5 times.