Conventional ON/OFF controllers are used only where we needed two-stage control operation, which always produces offset in the output. Oscillating nature of ON/OFF system between On and Off limits its usage and hence, it is replaced by PID controller. 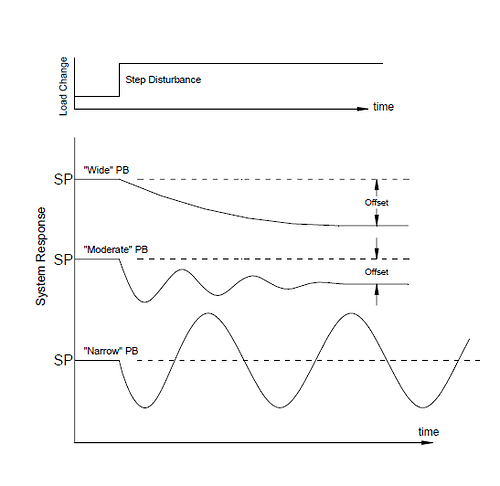 Process response for PID is shown in above figure. Every process has a fixed setpoint, every controller tries to maintain the PV ( process variable) at the SP( setpoint). The PID controller takes a control action when the PV reaches the setpoint. The incoming PV will definitely have an impact on the process output. This will affect the PV in the output to produce an offset below or above the setpoint.

If we wish to restore the process to the setpoint after a disturbance then proportional action alone will be insufficient. Integral control system integrates the errors in the process until the error becomes zero.

Process response and reset action for an integral controller is shown above.

If the integration happens at too fast a rate, the controller’s output will “saturate” either high or low before the process variable can make it back to setpoint.

If we wish to restore the process to the setpoint we must increase the input over and above that required to restore a balance. The additional input must replace the lost process parameter and then revert to a mass balance situation to maintain the PV at the setpoint.

Derivate control doesn’t look into the present PV value to control the output, but track the rate of change of variable and control the output with respect to it. It can be seen that the derivative action gives a large, immediate, control signal, which will limit the deviation. The proportional action is then superimposed upon this step. When the error stops changing derivative action ceases.

The rate response gives an immediate control signal, which will be equal to what the proportional response would be after some time. Derivative units are given in minutes.