Implementation of the control loops can be achieved using pneumatic, analog, or digital electronics.The first process controllers were pneumatic. They are replaced with electronics controllers, which are low cost and needed less maintenance.

The output from the process is compared with the setpoint through a comparator. The difference is fed to the integrator, differentiator, and proportional amplifier through two inverting unity gain buffer.

All the output from three proportional amplifier, differentiators and integrators are added at summing amplifier, which is a correction function. The correction signal is given to the actuators which makes a change in control action in the process.

The circuit implementation of the PID controller is :slight: 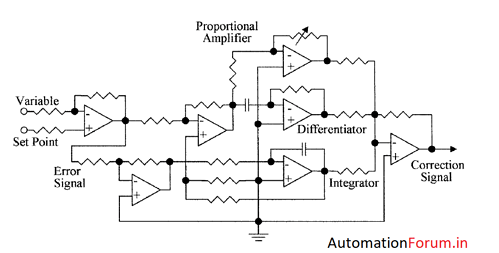 This is a complex circuit because all the amplifier blocks are shown doing a single function to give a direct comparison to the block diagram and are only used as an example. In practice, there are a large number of circuit component combinations that can be used to produce PID action.