What is a Variable frequency drive 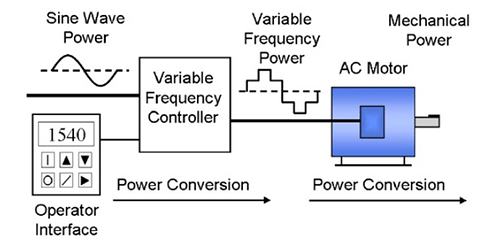 Why VFD is needed in a system

Why VFD is used for HVAC applications

It adjusts the speed of HVAC based on the demand to save energy and to increase the component life. VFD conserves energy when an HVDC control system senses that a motor can meet heating or cooling needs by running at less than 100 percent power

The rectifier converts the AC input to DC and then charges the capacitor in parts of the circuit, the DC power from the rectifier is fed to the DC circuit and it has capacitors and inductors to smooth the ripples and then it stores the DC power. Then the inverter circuit section will receive this DC power and then it converts it into AC the components in this section consists of IGBT, thyristors …

On the basis of control, it is classified into

When an induction motor is connected to a full voltage supply it draws more current than it is rated, when the load accelerates the available torque decreases a little and rises to the peak and the current remains very high until the motor reaches its full speed

Why do we need to use line reactors in VFD

Due to the installation of a large number of VFD’s or other equipment will distort the current and the voltage waveforms of the power supply, in that case, we can use line reactors which provides additional smoothing to that provided by the DC choke and it will reduce the VFD disturbances