VFDs (Variable Frequency Drive) are drivers which regulate the electric current to instruments. Instruments such as motors and fans work only at one speed if they are directly connected to the 3 phase power supply, that is these motors typically only have an on/off state of operation. 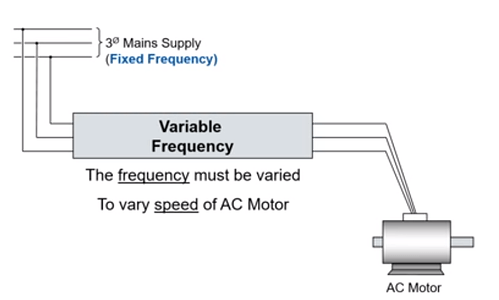 VFD is needed if multiple operation speeds are desired. Also, apart from selectable speeds, the efficiency of the overall system is increased due to the fact that the motor only sees the necessary amount of input power to achieve desired output power. Also, the motor can be slowly brought up to speed, eliminating huge start-up current spikes.

Working of VFD for a motor:

To understand the working of the VFD, internal diagram is shown below:

Two rectifiers are used for each phase, one is to convert the AC signal to DC signal and other will allow power to pass through only when the voltage is negative. Thus the AC voltage is converted to DC at the rectifier.

Then the DC voltage is passed through DC bus circuit, which contains capacitors and inductor or resistors, thereby smoothing the incoming power supply to the dc bus.

The final section of the VFD is referred to as an “inverter.” The inverter contains transistors that deliver power to the motor. The “Insulated Gate Bipolar Transistor” (IGBT) is a common choice in modern VFDs. The IGBT can switch on and off several thousand times per second and precisely control the power delivered to the motor.

The IGBT uses Pulse Width Modulation (PWD) to simulate a current sine wave at the desired frequency to the motor.

Pulse Width Modulation means amplitude of the analoge current signal increases as the width of the DC pulse increases. The voltage will be in pulse and current signal will be converted into sinusoidal. The amplitude of the sinusoidal wave is dependent on the width of the pulse and the delay of the pulse, which is adjusted to the desired current value.

The frequency of the signal is increased by the VFD for increase the speed of the motor. As frequency increases the motor torque decreases and speed increases.

1 Like
Variable Frequency Drive- Basics, Working and Selection of VFD
6 methods to keep the VFD's and Electric motors running and troubleshooting of VFD's
How to wire a VFD to a motor? Three phase and single phase VFD wiring
Why VFD is needed in a system and how can it control a motor
Why do we need phase converter and what does it do? what are the types of phase converter