What is VLAN and Hoe Does it Works?

A VLAN is a specialized network made up of one or more local area networks. It enables the integration of devices from several networks into a unified logical network. As a result, a virtual LAN is generated that may be administered in the same way that a physical LAN is. 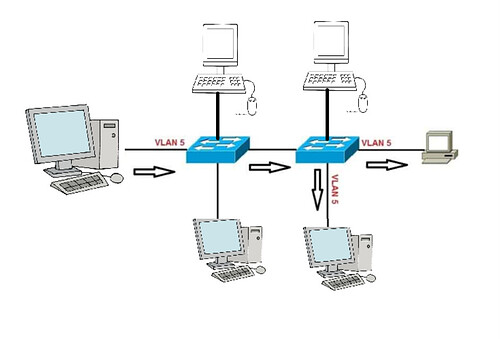 How does VLAN Works?

The switch only sends data to the port on which the VLAN is configured on the special port, performing address learning, filtering, and loop elimination process like a separate physical bridge. The VLAN is created in an Ethernet switch, and then the switch’s ports are allocated to the newly created VLAN.

VLANs are typically used in their data center when there are more than 200 devices in the LAN to separate specific traffic within a business. Because the number of switches with various network portions grows. LAN traffic makes it difficult for users to manage the remainder of the network. In a VLAN network, a single switch functions as a layer 2 or many switches of the OSI mode.

VLANs are mainly classified into five types. They are

Data VLANs are used to separate a network into two groups. There are two groups of users and two groups of gadgets. This VLAN, often known as a user VLAN, is only used for user-generated data. This VLAN simply transports data. It does not transmit management traffic or voice.

The Voice VLAN is set up to carry voice traffic. Voice VLANs typically have higher transmission priority than other types of network traffic. We must have a separate voice VLAN to ensure voice over IP (VoIP) quality (delay of fewer than 150 milliseconds (ms) over the network), as this will preserve bandwidth for other applications.

What are the Security Concerns on a LAN?

One of the advantages of a LAN is the ease with which users can access network resources and resources on other network devices. This can easily become a liability as well; when each network user has complete access to every other device, there should always be some cause for concern. In this regard, a LAN can pose a security issue.

Consider a less-than-trustworthy network user. Because of the nature of a LAN, he has access to all of the network’s resources. That rogue user might have complete access to all devices, and if they wanted to steal all network data from another user, it’s practically impossible to prevent that from happening without a high-end switch with significant Layer 2 functionality.

What are the ranges of VLAN?

The important characteristics of VLAN are

The following are some of the most important applications of VLAN:

Advantages and Disadvantages of VLAN