What is Schottky diode and its applications

A Schottky diode is also known as surface barrier diode , hot carrier diode or hot electron diode. It has a lower power drop across it than a normal p-n junction diode which is due to the diode design. It is a unipolar diode as in only one of the charge carriers are involved in the working. Applications range from radio frequency applications to power applications.

What is a Schottky Diode?

An ordinary diode is a sandwich of a p and a n type semiconductor layers acting as the cathode and anode being unidirectional. As current flows through the device, a potential barrier is developed at the junction of the layers which is the voltage drop.

But a Schottky diode is a semiconductor- metal sandwich hence the potential barrier is not as prominent. The n type semiconductor acts as the cathode and the metal as the anode.

What Is Schottky barrier

Thought the potential barrier is less, at the junction there is a formation of a depletion layer with electrons at the metal side which attracts the holes in the n type material pushing the electrons to the other side. Until an equilibrium with the energy bands of the metal and semiconductor is reached. The barrier is formed at the semiconductor region because there are already free electrons in the metals. This barrier formed is called the Schottky barrier 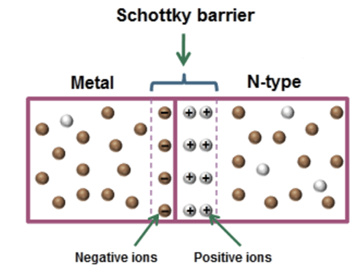 Ideally from the construction of the Schottky diode, there are two metal semiconductor junctions formed, i.e one between the metal and lightly doped n type semiconductor layer and another between heavily doped semiconductor and the metal layer. 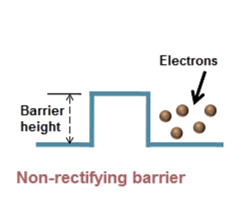 A junction between the lightly doped semiconductor and the metal is called a rectifying junction , where the barrier potential is high. Hence electrons need external additional push to flow through, The V-I characteristics of this junction is nonlinear. 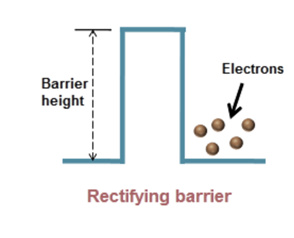 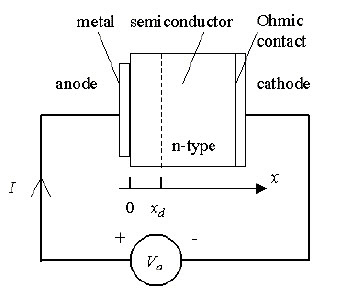 Since these are unipolar devices that depends on the electron flow in them, the parameters of a Schottky diode is determined by the doping concentration of the semiconductor layer.

Ideally Platinum, Tungsten, Gold etc are used as the metal in combination with the n type semiconductor. 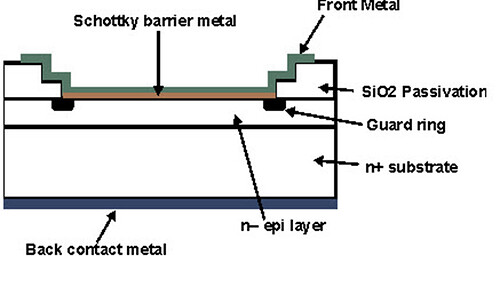 At the rectifying junction, near the barrier the current flow is unidirectional and conducting only after the the external voltage is greater than the voltage drop, hence it can be used in applications where clamping and rectification is needed at lower voltage supply.

The current flow in Schottky barrier diode due to the flow of majority carriers i.e. the electrons is given by

diffusion current density is given as  Jn=Dn*q*dn/dx  for electrons,

dn/dx is a concentration gradient for electrons.

In quantum mechanics tunnelling is a phenomenon where the electrons can tunnel trough the barrier when the excitation energy or activation energy to cross the potential Is very high .This follows that the electrons could tunnels through at the barrier where the potential begins but the probability decreases as the width of this layer of build In potential ( called the depletion layer) increases

Every element has a conduction band and valence band. while these bands intersect for metals, they are distinct and wide apart in semiconductors, at the metal – semiconductor junction they are in the intermediate level. Temperature can cause more electrons to be developed from the break down of the electron hole pair in the semiconductor. As temperature increases more electrons are produced and hence more current is produced.

When the positive terminal of a DC supply is connected to the anode (metal) and the negative terminal to the cathode (semiconductor),the setup is in forward bias.

Connecting the positive terminal of the DC supply to the semiconductor and the negative terminal to the metal is reverse biasing.

When a reverse bias voltage is applied to the Schottky diode, due to the positive potential at the n-type semiconductor, the electrons migrate to the ohmic junction thus the depletion width increases. consequently, the electric current stops flowing. So, when the diffusion current and tunnelling current does not flow due to the width of the junction, thermally excited electrons can move through. This is because as the voltage is increased the temperature in the materials also increases due to the resistance.

The V-I characteristics of a Schottky barrier diode are below 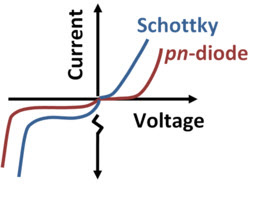 Low junction capacitance: The barrier, which can store energy acting as capacitor occupies a very small area, hence the capacitance levels are very small. The time constant is a function of resistance and capacitance. So it makes the system faster.

High Efficiency: Because of the low voltage needed, less energy is used and hat dissipation and subsequent loss of energy is avoided.