Multicast is a technique of group communication in which the sender distributes data to several receivers or network nodes at the same time. Multicasting is a sort of one-to-many and many-to-many communication in which a sender or senders sends data packets to several recipients at the same time across LANs or WANs. This procedure aids in the reduction of the network’s data frame. 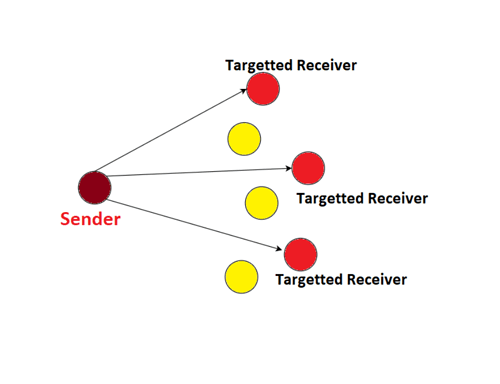 Multicasting is similar to broadcasting in that information is provided to targeted or specified members of the network. This task can be completed by sending individual copies to each user or node present in the network, but doing so is wasteful and may increase network latency. To address these drawbacks, multicasting allows a single transmission to be split up among numerous users, reducing the signal’s bandwidth.

Ethernet frames having a value of 1 in the least-significant bit of the destination address’s first octet are handled as multicast frames and are flooded to all locations on the network at the data link layer, this approach is known as multicast. IP multicast uses this technology to achieve one-to-many IP transmission on Ethernet networks. To reduce CPU burden, modern Ethernet controllers filter received packets by looking up the hash of a multicast destination address in a database that is initialised by software and regulates whether a multicast packet is dropped or fully received.

Over an IP network, IP multicast allows for one-to-many communication. The destination nodes send join and depart messages to the routers, informing them if they are the intended recipients of the communications. Regardless of the number of users, the sender only delivers the data packet once. The network routers make the necessary replications so that the packet can reach several receivers at the same time.

IP multicast or data link layer multicast are not used to provide application layer multicast overlay services. Instead, they simulate a multicast with several unicast transmissions. These services are intended for group communication at the application level. For all conference groups, Internet Relay Chat (IRC) uses a single spanning tree throughout its overlay network. PSYC technology, which is less well-known, employs unique multicast methods for each conference. When transmitting content to numerous recipients, certain peer-to-peer technologies use the multicast notion known as peer casting.

Another multicast approach is explicit multi-unicast (Xcast), which provides the addresses of all intended destinations within each packet. As a result of the maximum transmission unit constraints, Xcast cannot be utilised for multicast groups with multiple destinations. The Xcast model generally implies that the stations involved in the communication are known ahead of time so that distribution trees may be created and network elements can allocate resources ahead of real data transmission.

What is Broadcast in Networking?
Difference between Broadcast and Multicast?