What is Broadcast in Networking?

Broadcasting is a type of group communication in which a sender provides data to multiple receivers at the same time. This is a communication model in which each sending device sends data to all other devices in the network domain. 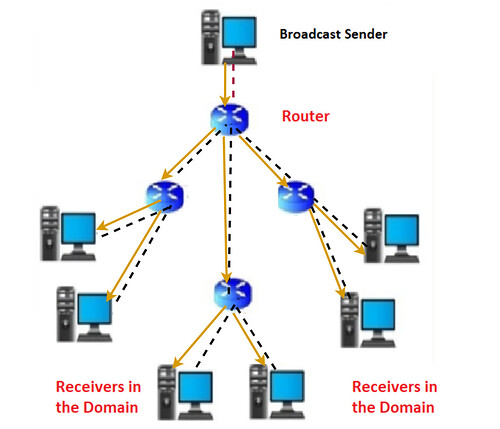 Broadcasting methods of operation may vary.

Each receiving station in a broadcast network gets all of the signals sent by the transmitters. Signal routing is accomplished passively. Each station may use a different wavelength to transmit. The receiver receives the intended signal and places it on the appropriate wavelength. As indicated in the image, the two most common topologies are the star and bus. In both circumstances, each station transmits to the area, resulting in wavelength-division multiplexing of all waves that reach it.

How does a broadcast work?

The sender initiates a connection setup through broadcast. The sender provides their contact information, which the receivers might utilize to contact them. A broadcast is thus analogous to a mailing list in that the recipients are not visible — and the sender does not need to know the network members’ addresses. Only after contacting the sender do the participants reveal their personal addresses. Participants in the network can open data packets and then understand the information, execute instructions, or reject them.

The limited broadcast specifies an IP address as the target. The IP address for this server is always 255.255.255. This broadcast technically targets all existing IP addresses. In reality, the supplied IP address is assumed to be the address for the broadcast in this network. This destination is always within the user’s own network and may thus be implemented via an Ethernet broadcast. A router does not forward packets in this manner.

A directed broadcast always addresses all recipients inside the target network. In this scenario, the broadcast address is produced by combining the number of the destination network and setting all host bits to 1. A router will forward a data packet if the destination is not in its own (sub)network.

Addressing is used to convey data from one system to another in a network using the Internet protocol. The IP address permits unique data packet forwarding and delivery from the source to the destination. This address, like a phone number, can be broken into a prefix and a call number, except that IP addresses are divided into network and host components. This subdivision is accomplished with the help of the netmask, which is applied as a template to the IP address. A netmask is the same length as an IPv4 address. It specifies which bits in the IP address act as the network or host part.

Ethernet technology connects software and hardware in wired data networks. This technique permits data exchange between customers who are locally linked. The Ethernet network is the most widely used wired network technology, particularly in business and home networks. Furthermore, Ethernet is frequently used as the foundation for intranets.

Advantages and Disadvantages of Network Broadcasting

Broadcasting aids in achieving economies of scale when a shared data stream must be given to everybody by reducing communication and processing overhead. In comparison to multiple unicast communications, it ensures greater resource use and faster delivery.

Broadcasting cannot support a high number of devices. It also does not allow for the personalization of messages based on the specific preferences of the devices.

Difference between Broadcast and Multicast?