What is Moog valve?

Moog valves are patented control valve by Bill Moog. It included many principles of hydraulic control developed over the centuries. However, it was his packaging and refinement that made such a powerful component the Moog fluid control valve.

A Moog valve’s clever part is its ability to reliably control high-pressure fluid flow with very small control inputs. The way it does this is by using the fluid pressure it manages to operate the valve.

How does a Moog valve work? 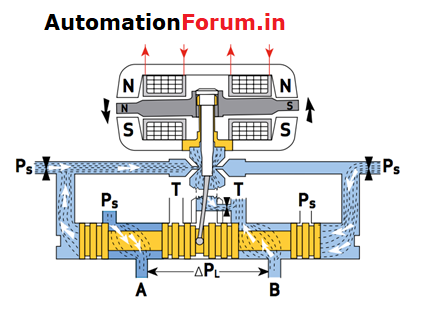 A Moog valve continuously pumps through two small jets facing each other a small amount of fluid. There is a flapper valve in a torque motor connected to the armature between them.

The armature sits between permanent magnets and it twists a small amount–a few degrees at most, as a current is fed to wire coils around the armature. It, in effect, pushes the flapper valve, obstructing the flow from one of the two jets and increasing the pressure in the feed relative to the other, which continues to vent through its uncontrolled piston.

Both of these pressure feeds are attached in a cylindrical gallery with cut-out valve orifices to either end of a sliding valve, called a spool. The pressure difference between the two feed pipes causes the spool to slide along the cylinder, opening a supply of the main pressure feed in the required direction through the ports.

The Moog valve has a further refinement that gives it a spectacular level of precision and control. There is a feedback spring at the end of the armature-mounted flapper valve. Simply put, this is a flexible member with a ball end in the spool.

At some point, the two opposing forces have reached an equilibrium that stabilizes the position of the spool and, in turn, the amount of restriction on the main flow of fluid. It allows for small changes in the current at the armature to make specific changes in the fluid flow. This idea also allows the Moog valve to act as an amplifier of fluid pressure

What is a servo valve and how does it work