What is a servo valve and how does it work

A servo valve can be considered as a directional control valve, basically, it is a pneumatic or hydraulic actuator that can connect more ways through which a fluid circulates. These valves are simple and rugged in design, and they are capable of infinitely variable positioning. Servo valves are capable to control the direction of the flow and they can also control the amount of the flow. Servo valves have certain sensing devices that would allow the perfect positioning and velocity of an actuator. Servo valves are used in hydraulic systems because these valves have internal feedback which is capable to provide better valve operation with high reliability. 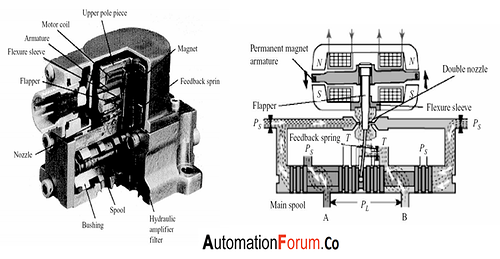 What are the characteristics of servo valve

What is the difference between the servo valve and proportional valve

How servo valves are constructed

The servo valves have three major parts they are the control motor, hydraulic amplifier, and the main slide valve. The electrohydraulic servo valves have a motor and the motor consists of coils, magnets, and armature. Flexure tube is used to support the armature for small movements, this tube also provides a fluid seal between the hydraulic and electromagnetic portions. In the center of the armature, a flapper is attached and this flapper is extended towards the flexure tube. A nozzle can be seen on both sides of the flapper and the nozzle opening is dependent on the flapper motion.

What is a Moog valve and how does it work

How does a servo valve work 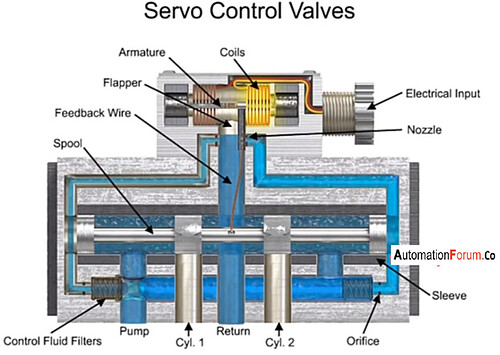 Servo valves are mostly used for accurate position control and an electrical signal is used to control the servo valves. These valves are widely used in electrohydraulic systems because it has the advantage of using small power electrical signals to position the actuator or motor. A feedback system is used to ensure that the actuator does what the controller asks it to do. This feedback is achieved with the help of some electronic device mostly it is a transducer. This transducer is capable to produce the signal according to the direction and speed of the flow and this will be given to the feedback system and the flow direction and speed can be changed according to the need. The fluid will enter through the inlet and then it will reach the orifices after that it travels through the two spools and after that to the nozzle and then to the return line. The operation of the valve starts with an electrical signal and this will make the armature push the flapper from one nozzle and this flapper would be closer to the other nozzle. This would create an increase in pressure at one end of the spool and decrease at the other end and the spool will change its position from higher pressure according to the armature rotation the spool movement can be controlled.

What are the types of servo valves

This valve is a mechanically operated servo valve and it will control the flow of fluid in an actuator. This type of valve can be considered as a force amplifier that is used to control the position. The spool is shifted to the required direction with the help of a small input force. The oil will flow through one of the ports and the direction of the hydraulic cylinder is changed too. The flow to the hydraulic cylinder is blocked by a sliding sleeve. So by the input signal, we could get a required output motion. This system is known as a closed-loop system in which the output is given to the input to change the input.

In this type of servo valve the operation is done with the help of analog or digital input and this input is used for the required movement in a hydraulic cylinder. The important components in a servo valve are torque motor, flapper nozzle, and spools. If the input is given to the torque motor then the motor will be powered, the input will be electric power. Because of the input, the torque motor will move the spool of the servo valve according to the requirement. The direction of the flow can be controlled by shifting the spool direction. If the flow direction needs to be changed then the spool is shifted to the other direction

What are the applications of servo valve