MODBUS Protocol is a messaging structure developed by Modicon in 1979, used to establish master-slave/client-server communication between intelligent devices.

In Modbus communication between devices are established using a master-slave technique. The master device gives instructions to read or write data from the slave devices. Slaves respond to the instructions given by the masters.

A master can be a controller system, slaves are peripheral devices. Masters can either communicated with an individual slave or broadcast the message to all the slaves.

A Modbus master transfer data which contains information on the address of interrogated slave (1 byte, Function code that defines the request of the master (1 byte ), data to be exchanged (n byte), CRC16 control code (2 bytes).

The transmission mode defines the bit contents of the message bytes transmitted along the network, and how the message information is to be packed into the message stream and decoded. 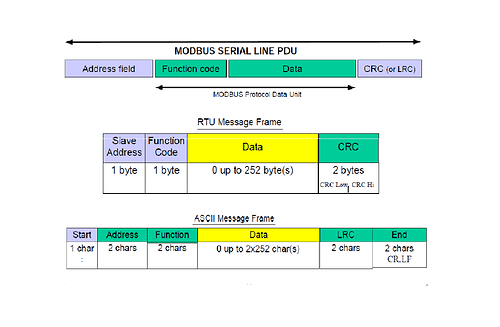 Data framing for both ASCII and RTU modes are shown in above figure.

In ASCII (American Standard Code for Information Interchange) transmission mode each character bytes in a message is sent as 2 ASCII characters. This mode allows time intervals of up to a second between characters during transmission to distinguish characters.

Character frame for ASCII is shown in the figure. ASCII message start program with colon character “…” and end with a carriage return-line feed pair of characters (CRLF, ASCII 0DH & 0AH). ASCII Mode data 'byte’ or character is only 7 bits long.

In ASCII mode, all network devices monitor for the colon character so that they understand there is a message. And the message is decoded only at the addressed device.