What is Electric Traction and how is it useful for Vehicles

Traction is the act of drawing or pulling, by an elastic or spring force. It refers to a maximum frictional force that can be produced by a surface without slipping

Why traction is needed

If we walk into a surface without good grip our legs and feet could not move us forward and it is same for the vehicles if the ground does not provide enough resistance or traction, the generated force from the engine won’t be able to move the car If there is more traction then more torque can be generated to move more weight

Types of a Traction system

• Non-electric traction system– this system does not use electricity at any stage example steam engine drive, internal combustion drive

Electric traction is subdivided into

• A system which operates with DC such as trolley, buses, tramways, and railways

• A system which operates with AC such as railways 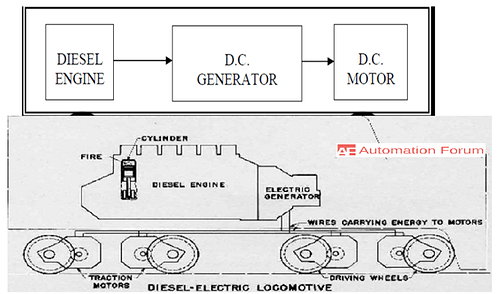 What are the requirements for a traction system

• The starting tractive force should be high to have rapid acceleration

• The track wear should be minimum

• This equipment must be capable to withstand large temporary loads

• It must be pollution-free

• Speed control should be easy

• Maintenance and initial cost must be low

• The system should be self-contain

• It is the cheapest method of traction

• It is free from smoke and flue gases

• To achieve electric braking and control additional equipment are needed

What is a traction motor

The traction motor is an electric motor which provides the primary rotational torque of a machine, mostly for conversion into linear motion, it is mostly used in electrically powered rail vehicles such as electric multiple units and electric locomotives

It is expanded as separate excitement of traction motors, in which the armature and field coils of an electric motor are fed with the independently controlled current. It also controls a degree of automatic wheel slip control during acceleration