Machines that convert electrical energy o mechanical force is called motor. Depending on the type of electrical input that is used, it can be either dc or ac motor. Motors work on the principle of electromagnetic induction. All types of AC motors with its applications and disadvantages are discussed below

Alternating currents are used to energise the system in an AC motor. General construction of a motor includes a stator- the outside stationary part and an rotor- the rotating part inside that is attached to an shaft that contributes to the mechanical movement.

Depending on the input supply, they may be poly phase or single phase induction motors. Poly phase induction motors are of two types: 1. Squirrel cage rotor Most common type of inductance motor, the rotor is made of laminated iron core covered with varnish in a gear shaped structure with spacing for the rotor rods that is placed in a conducting cylinder shaped like the pet exercise rotating wheel. It consists of two rings placed apart connected to each other by parallel rods. The rings termed as end rings ad the rods are made of cast aluminium or copper. Using copper increases the efficiency by reducing the resistance in the rotor. During loading condition initially, high current is drawn for a high magnitude rotating magnetic field to start the rotation of the rotor. They are cheaper and rugged so they can be used in various application especially where the motor cannot have constant maintenance. 2. Wound rotor The problem with the squirrel cage rotor is the high initial current that it draws from the supply to initiate the rotor. In motors with 10s of KW in rating, this is a major issue that large currents to the order of burning out the other circuitry will be drawn, to compensate for this initial resistance is provided to the rotor. The resistance is provided by slip rings and brushes arrangement which is then shorted as the rotor starts to increase its speed. When the resistance of the slip rings Is removed, this acts just like a squirrel cage rotor. These rotors are costly with high maintenance due to the brushes and slip rings. They are used for traction i.e. in locomotives. These type are also used where variable speed is necessary, the speed controlled by engaging the slip rings (resistance) which now a days variable frequency drives do. 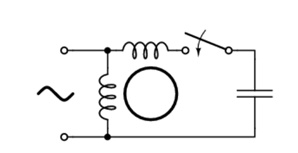 b. Resistance start: A starter is added in series with the split input. While they do provide phase shift the shift is not high enough. To include a starter, thin wires are wound large number of times at any one of the poles, this will give high resistance and low inductive effect. Though the starting torque is not as high as a capacitive split phase, it can be used in applications with easy starting. 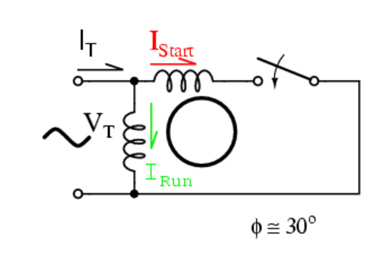 c. Permanent split capacitor: The capacitor is included in the circuit in series with the primary and auxillary winding providing a phase shift to the setup. This capacitace is notturned off by a switch once the rotor starts the rotation. Used in applications where the reversal of the rotation is needed with variable torque requirement. Eg : In a lift. The capacitance used has low impedance to reduce losses. 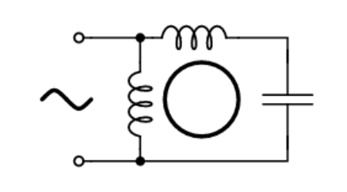 Single phase induction motors are not self-starting like the squirrel cage polyphase motors.

Structure of a Synchronous motor

Synchronous motors are divided into the following

What is an electric motor and how does it work? Types of electric motor
What is Electric Traction and how is it useful for Vehicles
How Regenerative braking system can be used to Reduce the fuel consumption in Vehicles