What is a Transducer? Classifications of transducers: 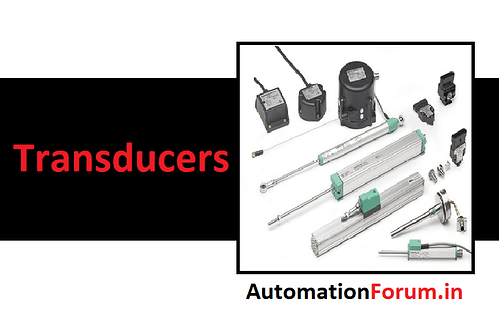 A transducer is a device that senses a physical parameter and converts it into a measurable form. Simply we can say that it is a device capable of converting physical quantity into a proportional convenient form or state.

Transducers are also known as “Pickups” and there are several types of transducer because there are varieties of parameters to measure. The transducer or the response tool may be electronic, electrical, optical, acoustic, magnetic, thermal, radioactive, chemical or all of its variations, but for the following purposes electrical devices are favoured:

Operating Range: The transducer will satisfy the necessity for range and provide reasonable resolution over the whole area.

Span: The dynamic range or period is the spectrum of physical inputs which the sensor may translate to electrical signals.

Accuracy: Uncertainty is commonly defined as the greatest error predicted between the real and calculated output signals. High accuracy is assured.

Precision: Precision is an instrument’s ability to repeat a specific series of readings within a given range.

Resolution: The smallest change in the measurable value that can be detected. The output signals for certain sensors can shift in small steps if the input changes continuously across the range.

Stability: Power of a sensor when used to quantify a constant signal over a period of time to provide the same output.

Repeatability: The flexibility of the sensor to provide the same output for repeated applications with the same input value.

Dead Band: Range of input values for which there is no output.

Dead time: Length of time from the application of input until the outputs begins to respond and change.

Role of a transducer in a control system:

What is the difference between transducer and sensor?

The sensor is a system that detects a physical quantity and transforms it into an analog quantity that can be electrically measured, such as voltage, capacitance, inductance, and ohmic resistance.

The transducer is a sensor-connected system to transform the quantity measured into a regular electrical signal such as 0-10V DC, -10 to+ 10V DC, 4 to 20mA, 0 to 20mA, 0-25mA etc. The device manager will use the transducer’s o / p right away.

Transducers can be classified on the basis of:

Active transducers are self-generating devices, their functioning being based on the conversion of energy from one form to another. Active transducer doesn’t need any external power to excite them.

Passive transducers, on the other hand, do not generate any energy They need be excited by the application of electrical energy from outside.

The electrical device then transforms this mechanical signal to an electrical signal correspondingly. This electrical equipment is known as a secondary transducer.

Analog transducer converts the quantity of input into an analog output that is a continuous function of time.

Digital transducer converts input quantity into an electrical output is in the form of pulses eg: Glass scale, Metallic scale.

On the basis of transduction principle used

The measurement spectrum is translated into a transition inefficiency in capacitive transduction transducers.

In inductive transduction, the measurand is transformed into a transition in a single coil’s self-inductance. It is accomplished by shifting the centre of the coil fixed to a mechanical sensing element.

In piezoelectric induction, the measurement range is transformed into a change in electrostatic charge q or voltage V produced by crystals when it is stressed mechanically.

In photovoltaic transduction, the measurand is converted to voltage generated when the junction between dissimilar material is subjected to light above particular intensity.