A Directional Control Valve controls the direction of a fluid in the hydraulic system pass through. The device redirects or stops the fluid flow with the help of internal mechanism in the valve. Valves contain ports that are external openings for fluid to enter and leave via connecting pipelines, The number of ports on a directional control valve (DCV ) is usually identified by the term “ way”.

There are different types of DCVs that are classified based on the fluid path:

Type of DCV allows fluid flow only in one direction.

Fluid flows through the inlet, a small pressure is needed to open the valve seat in this direction. The valve opens when there is a flow through the inlet. Here in the figure above shown a ball type check valve.

Whenever there is a flow opposite to this direction the valve shuts. The pressure in the opposite direction press the ball against the valve seat, thus close the path.

A shuttle valve allows the flow in two different directions.

Two positions of the shuttle valve are shown here. When the pressure of the flow on one side increases the valve closes the other path. The closing/opening condition for both paths are illustrated in the above figure.

Shuttle valves are used where there are two pumps which are used in a way if one fails to maintain the outlet pressure the other pump supply the flow as a backup.

Spool-type valves are commonly used as they can be transferred to two, three or more routing fluid locations between various inlet and outlet ports combinations. These are commonly used for steering control of actuators because a single valve can produce extension, retraction and neutrality:

There are three variants of spool type valve Two-way, three-way and Four-way valves: 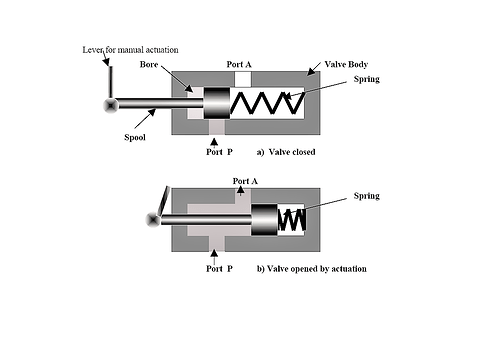 There is normally closed and normally opened two-way valves, external actuation is needed to do the position change of the valve actuator.

A flow path is established or closed when the actuator is moved. These valves are also called as on-off valves 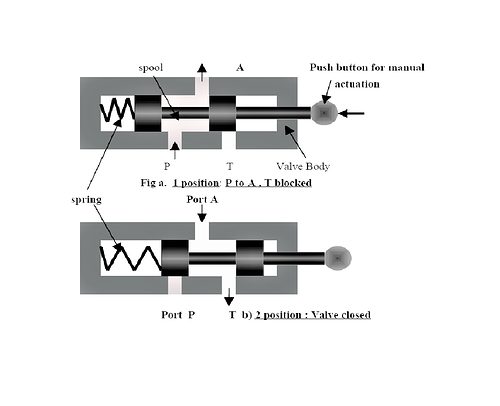 A three-way valve has two plug actuators each plug controls the flow in two different ways. The two plug positions are shown in the above figure. When one of the plugs closes a node other one opens the other node.

This normally closed valve neutralize the position of the actuator closing both the node to close the valve.

Four-way valve or three position valves which got three working positions for the actuators to control the flow direction. 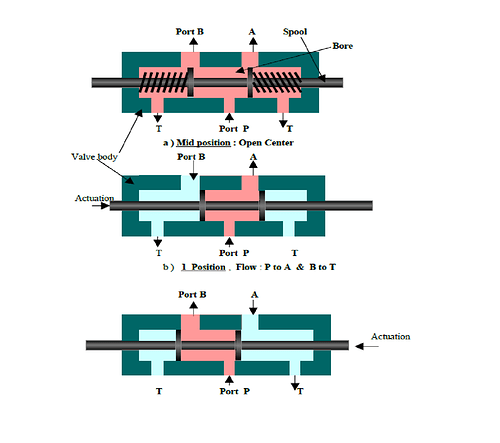 These valves are generally used to operate cylinders and fluid motors in both directions hydraulically.

These valves are available with a choice of actuation, manual, mechanical, solenoid, pilot & pneumatic. Four-way valve comes with two or three positions. One should note that the graphical symbol of the valve shows only one tank port even though the physical design may have two as it is only concerned with the function.