Servo systems involve continuous monitoring, feedback and correction. They are also used to improve efficiency, accuracy and repeatability. The most common applications of the servo valves are in aerospace vehicles, particularly in primary flight controls.

Servo valves have additional features from other valves, they are:

The main part of a servo valve is a valve spool, it is similar to the spool-type directional control valve, that is, a sliding spool that operates in the bore of the valve body to open and close the flow path between ports.

There are different types of spool,

The most common condition is the line-to-line (or zero-overlap) spool. Here, the bandwidth exactly matches the port width. Overlapped spools have lands that are 0.5–5% wider than the ports. These spools have the advantage of providing lower leakage flow in the null position than the line-to-line configuration. An underlapped spool has lands that are 0.5–1.5% narrower than the ports. This design is often referred to as “open centre” although there really are no open-centre servo valves.

Servo valves may be single-stage (also called direct-acting), two-stage or three-stage, depending primarily on the flow requirements of the system.

The single stage valve, which employs just one linear force motor (proportional magnet) to move the spool to either side of the central position. The electric signal from a position transducer is then used for closed loop control of the spool position. 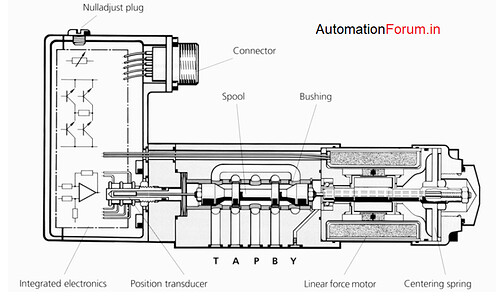 The mechanical connection between the torque motor armature and the coil is a rigid cable. When there is no command input in the torque motor, the armature is in the neutral (nulled) position, which, in turn, causes the coil to be in the bypassed position, and there is no flow through the valve. A deflection of the armature clockwise pushes the coil to the left, opening the flow path from P to B and from A to T. A deflection counterclockwise opens P to A and B to T.

This valve can be used to control the direction and speed of a hydraulic motor. The pilot spool is positioned by the torque motor. The pilot stage is manga. This sleeve is associated with the internal feedback mechanism of the valve. 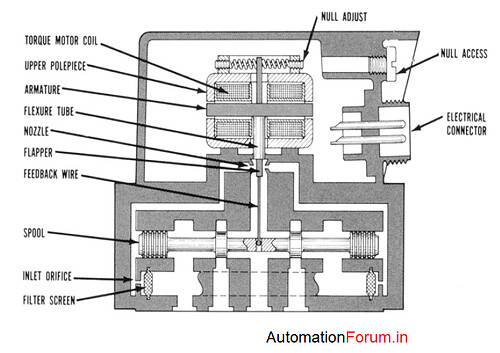 The electrical current in the torque motor coils causes either clockwise or counter-clockwise torque on the armature. This torque displaces the flapper between the two nozzles. The differential nozzle flow moves the spool to either the right or left. The spool continues to move until the feedback torque counteracts the electromagnetic torque. At this point, the armature/flapper is returned to the centre, so the spool stops and remains displaced until the electric input changes to a new level.

For high flow capacity, the required power to drive the main pool will be high. In such applications (flow capacity over 150 litres/min and maximum pressure about 350 bar) a three-stage valve will be used. 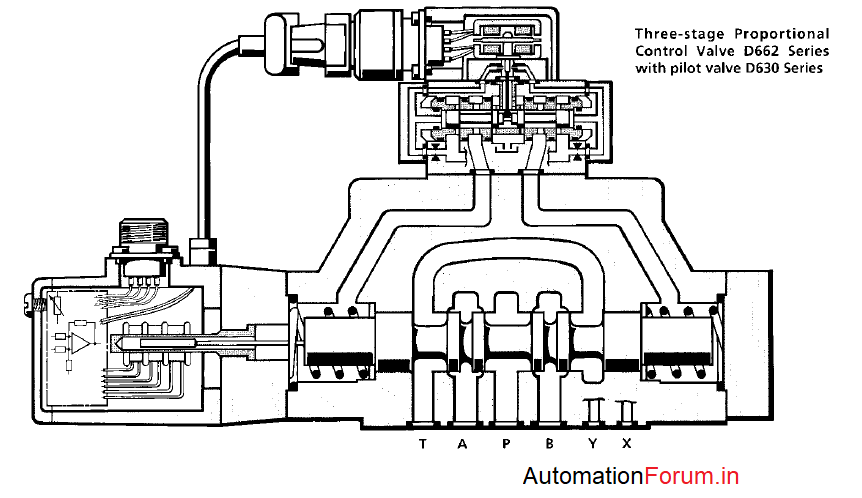 This valve has an electrical feedback for the main spool position control. In the controller, this signal is compared with the command signal. The controller drives the pilot valve, in this case, a two-stage servo valve, until the error between the command and feedback signal is zero. In the same way, as for the foregoing valves presented, the position of the main spool will be proportional to the electrical command signal.