The hydraulic servo motor is controlled using servo valves, which are the type of spool valves. The control is governed by Electrohydraulic Servomechanism Concepts.

The EHPV is set to provide the necessary flow to drive the motor at the required speed. As long as there are no disturbances, the speed remains constant. If there is any change in the operating parameters such as load, fluid temperature, viscosity and wear then the motor speed is likely to change. There is nothing designed in the system to detect the change and present the information to the valve controller that can automatically correct the change and return the speed to the required level. 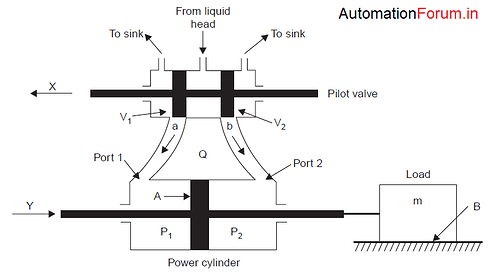 The above figure shows a pilot-valve-controlled hydraulic power amplifier and actuator. The positioning of pilot valve needs very little power but it can control a very large power output to drive heavy mechanical loads.

If the pilot valve is positioned so that the coverage of ports a and b by the respective valves V1 and V2 are equal, the leakage fluid flow through ports a and b will also be equal, causing pressures on both sides of the Equal piston power.

If the pilot valve is moved to the left from the neutral position, x < 0, the pressure on left hand side of the power piston will be more than that in the right hand side (P1 > P2), as a result, the power piston, along with the attached load,