How does a wind turbine work?

Flowing of air or other gases through a planet’s surface is called wind.

What is wind energy?

Wind energy or wind power is the technology used to produce either electrical or mechanical energy from wind.

What is Wind Turbine?

Wind turbines are designed to convert the kinetic energy from the wind into mechanical power. This mechanical power can be used for some tasks like grinding grain or pumping water or can convert it into electrical energy.

What is a wind farm?

Wind farms are collections of wind turbines. Nowadays, electricity is much essential for our daily life and legacy energy-producing methods like thermal power plants are harmful to our nature due to global warming. So, the production of electricity from various renewable resources such as wind, tidal, etc are more important methods to produce electricity to meet our needs.

How to convert wind into electrical power?

Energy in the wind turns two or three blades (propeller) around a rotor. This rotor is attached to the main shaft of the wind turbine, which spins a generator to produce electricity.

Wind turbines are mounted on a tower to capture as much energy as possible. They can take advantage of the faster and less turbulent wind at 30 meters (100 feet) or higher above ground.

How does a wind turbine work? 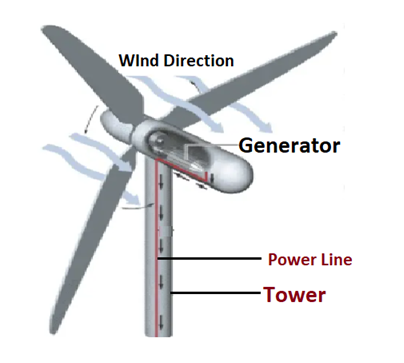 The wind turbines consist of three blades that are mounted to a tower made from tubular steel. Some turbines have two blades or concrete or steel lattice towers. The tower, which is 100 feet or more above ground, allows the turbine to take advantage of faster wind speeds found at higher altitudes.

A series of gears raise the rotor rotation from 18 RPM (revolutions per minute) to 1800 RPM. The speed allows the turbine to generate electricity in AC (Alternative Current).

A nacelle is a streamlined enclosure that houses key turbine components, which typically include the gears, rotor, and generator. Some of the nacelles at top of the turbine tower are large enough for a helicopter to land on.

The turbine’s controller is one of the major components of a wind turbine that helps to keep the speed of the rotor from exceeding 55 mph to keep away from damages due to the high-speed winds.

A device called an anemometer is designed to continuously monitor the speed of the wind and send the data to the controller. A brake is attached to the nacelle to stop the rotor in emergencies either mechanically, electrically, or hydraulically.

There are two types of wind turbines available

• Drag-based turbines, also known as Savonius turbines, typically have rotors with solid vanes that rotate about a vertical axis.

• Lift-based turbines, also known as Darrieus turbines, have tall, vertical airfoils (some appear to have an eggbeater shape). The Windspire is a lift-based turbine that is currently being tested independently at the National Renewable Energy Laboratory’s National Wind Technology Center.

A wind turbine is made up of the following parts. They are 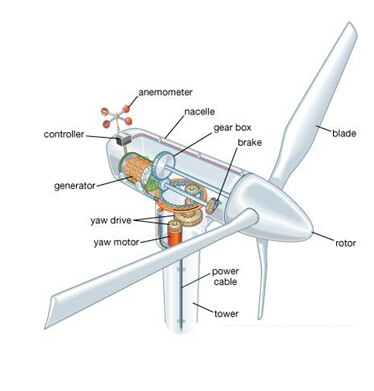 Anemometer is used to calculate the speed of the wind and sends the collected data to the controller.

Some winds turbines have two blades and some contain three blades. This blade rotates when the wind blows on it.

A disc brake, can be applied mechanically, electrically, or hydraulically to stop the rotor in emergencies.

The controller starts the machine at wind speeds ranging from 8 to 16 miles per hour (mph) and shuts it down at 55 mph. Turbines do not operate at wind speeds greater than about 55 mph because they could be damaged.

Wind turbine towers come in a variety of heights, with the average being around 50m and the tallest exceeding 200m.

To provide ultraviolet resistance, they are typically coated with a zinc-based finish as well as epoxy and urethane layers.

The average weight exceeds 40 tonnes, and the tower can frequently account for more than 10% of the total cost of a wind turbine.

The rotor is the rotating part of a turbine; it is made up of three blades and the hub, which is the central part to which the blades are attached. A turbine does not have to have three blades; it can have two, four, or any number of blades. However, the three-blade rotor has the highest efficiency and other benefits.

The blades are hollow and made of composite material to be light and strong. The current trend is for them to be larger (for more power), lighter, and stronger. To be aerodynamic, the blades take the shape of an airfoil (similar to airplane wings). They are also not flat and have a twist between their root and tip.

The hub’s function is to hold the blades and allow them to rotate in relation to the rest of the turbine body.

The generator is the component that converts the mechanical energy of the rotor, which is harnessed from the wind, into electrical energy. A generator is built in the same way as an electric motor.

At the commercial level, all electricity is generated using a three-phase alternate current. In general, the choice of generator is either synchronous or asynchronous (induction). Nonetheless, the induction generator has been associated with wind turbines thus far because a synchronous generator must turn at a tightly controlled constant speed (to maintain a constant frequency).

Measures wind direction and communicate with the yaw drive to properly orient the turbine in relation to the wind.

What are various types of renewable energy available?
What are the types of power plants?