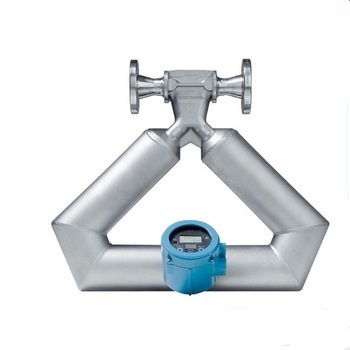 Why is it important to use mass flowmeters?

Flow measurements are important in industrial automation, and there many flow meters available in the market. In food industries and health industries, it is important to measure that how much amount of fluid flown into the process to ensure the quality of the product. While commonly flow meters measure volumetric flow. Mass flowmeters can measure both mass and density as well.

How a Coriolis mass flowmeter works?

In the Coriolis meter, the flow is split into two paths and made to pass though hanging two tubes. When there is flow through the tubes hang stationary.

When there is flow through the channel the fluid splits and half of the fluid pass through each tube. The drive coil attached to the tubes makes the tubes to oscillate in opposite direction.

Flow tubes start to oscillating opposite to each other. Electromagnetic sensors attached to each tube produce sine waves with respect to the oscillation of the tubes.

The Phase shift between the waves produced by the two tubes in microseconds are proportional to the Mass flow through the tubes. Greater the phase shift greater will the mass flow rate.

And the Frequency of oscillation of the tubes is proportional to the density of the flowing liquid. The microprocessor associated with the sensors converts the Frequency and Phase shift into Density and Mass flow.