Let’s check-out the differences between both techniques which would be helpful to choose a better technology suitable for your purpose.

We have listed some factors that differentiate them.

Ultrasonic level meters: Ultrasonic meters send sound waves from the top of the tanks to the bottom. If there is liquid in the tank the wave hit and reflect backs to the transmitter, the time of travel is measured which will be a function of level in the tank. 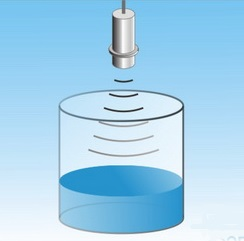 So that the Ultrasonic level meter is Non-contacting types meter, which doesn’t need to be in contact the process fluid.

Guided wave meter: Guided waves meter sends microwaves through a probe. The microwaves start reflecting back reaching the liquid level. The strength of the wave increases as the dielectric constant of the liquid increases. 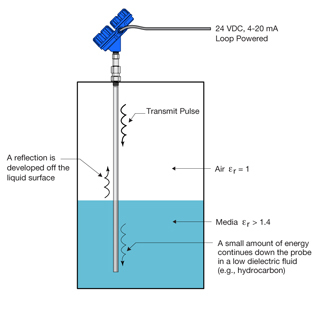 There is a probe for guided level meter from the top to the bottom of the tank so that this a Contacting type meter.

Speed of waves and Number of readings possible:

Guided wave meter: The guided wave meters also measure the time of flight, But signal goes beyond the level to the bottom reflects the signal at each point, make sure of the is correct. The first reflected will be greater than signal starts to distort continuously. If there is higher signal below the first returned we have to check for forms above the liquid level.

Ultrasonic meter: There is a higher chance to produce noise compared to guided level. Because of the signal is sent as sound waves, the wave can spread and may hit on the side walls of the tank and reflect back to the transmitter.

Guided level meter: There is no chance of waves to hit side walls as the waves pass through the probe.

Situation where liquid inside the tank have Turbulence:

Ultrasonic waves: The waves get reflected from both the crest and trough and reflected signals from the walls, which makes the return signal more distorted.

Guided level meter: The waves are sent in one line through the probe. There no chance to get the waves distorted. The guided level has a definite upper hand in this case.

Forms are formed above the liquid surface for many reasons.

Ultrasonic level meters: As the ultrasonic waves get absorbed by the forms, the signal produced get trapped in the forms.

Guided wave meter: The guided wavemeter can cleverly overcome this situation, as the microwave signals are sent to the bottom it will not get distorted. Even though the forms get detected by the wave only a small amount of wave will be reflected, which will not get counted by the associated microprocessor.