Why does induction motor use heavy current at starting?

For maintenance engineers, starting an induction motor is the most difficult task. To start higher-rated motors, we’ll need to create a heavy starter, a large autotransformer, or a VFD. If the motor rating exceeds 350kw or 500 HP, it will cause major problems for the other feeders when the motor is started. 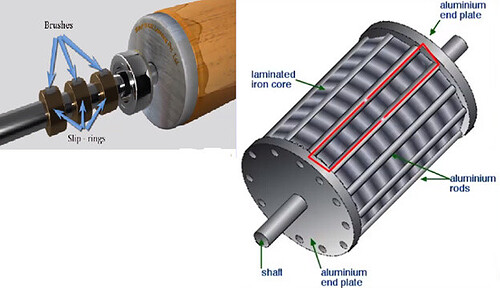 Starting an induction motor results in a significant voltage drop in other sister feeds, a spike in maximum demand at the grid energy meter, and a high magnetising current required, all of which necessitate the installation of shunt capacitors and large current carrying capacity switchgear

The figure depicts a model of an induction motor circuit. Induction motors are made up of two branch circuits that are connected in parallel, as shown in the model.

While a DC motor will never exceed its maximum load current, an induction motor will take 3 to 5 times its full load current for a few milliseconds even if it is started by a VFD.

The Reason For induction motor draws heavy current at starting

We know the basic induction formula.

dV/dt is changing in voltage when time changes

dI/dt is current value changes with respect to time

Let’s start with the current, that is, what is the current when t=0? To find the solution, we must first identify the inductive reluctance.

At t=0, then inductance XL=0 because frequency=0

Note: dV/dt=constant=applied voltage. We are supplying a constant voltage

Then you will get

That is why induction motors require a large amount of beginning current.

The existing situation varies as time passes. The motor current becomes I= to the motor nominal load current when t=0 to a specified number of working hours.

This is a fact that cannot be changed. Reduce the applied voltage as shown in equation number to reduce the beginning current.

Presence of stator and rotor

When the slip is high, the rotor current will be extremely high. When the induction motor is first started, the slip is normally large, s=1, and the motor speed is zero.

At the same moment, the rotor emf equals the stator applied voltage slip times. As a result, the induction motor’s speed is zero at the start, and the slip is maximum.

As a result, the size of the rotor-induced emf is initially very enormous. However, due to rotor structure, the rotors’ conduction is short-circuited. At first, the huge emf flows a lot of current through the rotor. Take the transformer now.

Similar phenomena are also taken into account in three-phase induction motors. The stater draws a lot of current from the input power source when the rotor current is high.

The rotor current is typically 5 to 7 times that of the full load current.

High Starting Currents in Induction Motors Have the Following Drawbacks:

High inrush currents are drawn by an induction motor when starting can cause a significant drop in linked bus voltages. This drop-in bus voltage can have an effect on the performance of other motors on the bus. Voltage dips caused by huge motor starts can trip some of the motors on the same bus. By using suitable starting methods, proper inrush currents can be limited during motor start.

The number of starting determines the machine’s life for large motors. High inrush currents can raise the temperature of the machine, damage the insulation, and shorten the equipment’s life.