What is the importance of 4 to 20mA current loop?

The Basics of Current Loop

Kirchhoff says: Current is constant along any wired loop 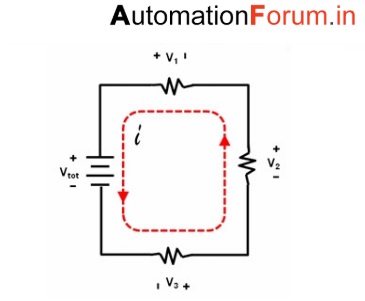 Even if there is significant electrical resistance in the line, the current loop transmitter will maintain the proper current, up to its maximum voltage capability.

• Only two wires are required to send the signal and also supply power to the sensor • Signal may be analog or digital • The live-zero represented by 4 mA allows the receiving instrument to detect some failures of the loop • Also allows transmitter devices to be powered by the same current loop (called two-wire transmitters). • Such instruments are used to measure pressure, temperature, flow, pH … • A current loop can also be used to control a valve positioner or other output actuator. • An analog current loop can be converted to a voltage input with a precision resistor.

There are 2 types of current loop circuits 1.Full duplex 2 The Simplex 20 mA Circuit 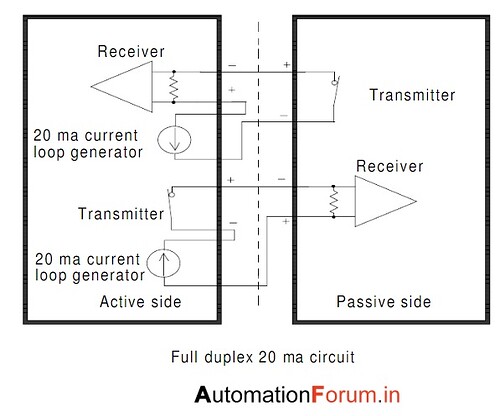 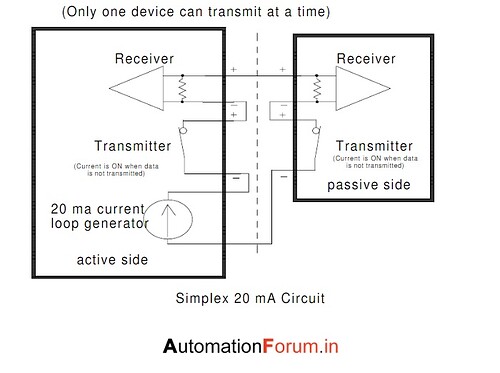 The diagram shown in Figure is an analog 4 to 20 ma current loop. This circuit is mentioned here because it is sometimes confused with 20 mA digital current loop. The purpose of 4 to 20 mA analog current loop is to transmit the signal from an analog sensor over some distance in the form of current signal. Only two wires are required to send the analog signal and also supply power to the sensor. A loop supply voltage is used to power the remote sensor. The remote sensor regulates the loop current such that the loop current represents the value of the parameter being measured by the sensor. A series resistor RL at loop power supply converts this current to a voltage that can be used by the electronics to record or distribute the parameter being measured.

Figure 12 is another example of a type of 4 to 20 mA combined analog & digital current loop. This current loop uses HART® Communications protocol. The HART® (Highway Addressable Remote Transducer) protocol is used for SMART remote transducers that are compatible with 4 to 20 mA analog current loops but also have digital communications on the same two wires. This is accomplished by superimposing a two-tone Frequency Shift Keyed (FSK) digital current signal on the 4 to 20mA analog signal 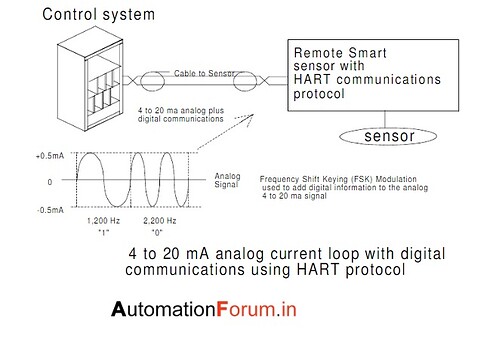 Why Use a Current Loop?

The 4-20 mA current loop shown in the Figure is a common method of transmitting sensor information in many industrial process monitoring applications. A sensor is a device used to measure physical parameters such as temperature, pressure, speed, liquid flow rates, etc.

The transmission of sensor information through a current loop is particularly useful when the information must be sent to a remote location over long distances (1000 feet, or more). The operation of the loop is simple: the output voltage of the sensor is first converted to a proportional current, with 4 mA which normally represents the zero level output of the sensor and 20 mA representing the full scale output of the sensor. Then, a receiver at the remote end converts the 4-20 mA current back into a voltage which in turn can be processed by a computer or display module.

Disadvantages of 4 to 20mA

Looking ahead, the future continues to look bright for the 4-20mA signal transmission standard in industrial environments. Its lossless nature, lower-sensitivity to induced noise, its live-zero offset, fail-safe operation, and easy scalability contribute to its longevity. Plus its adaptability to many different wire conductors and connectors, and its relative immunity to poor quality connections, all contribute to its popularity. And because it is so widely supported by thousands of compatible devices, including wireless transducers, it would be difficult to unseat it as the leading analog transmission standard for industrial I/O. Likewise, modern variations of 4-20mA such as HART1 continue to drive support for the standard.