What is starters and where is it used?

As the name implies, starters “start” motors. They can also stop them, reverse them, accelerate them, and protect them.

Starters are made from two building blocks, contactors and overload protection:

A contactor can stand on its own as a power control device, or as part of a starter. Contactors are used in applications ranging from the light switch to the most complex, automated industrial equipment. Contactors are used by electrical equipment that is frequently turned off and on (opening and closing the circuit), such as lights, heaters, and motors. Whatever the application, the function of the contactor is always the same: to make and break all power supply lines running to a load. Or, as defined by NEMA, to repeatedly establish and interrupt an electrical power circuit.

1.Knife Blade Switches The first device used to stop and start electric motors was a simple knife blade switch. This was a lever that would drop a strip of metal onto a contact to make the electric circuit. In the late 1800’s, “throwing the switch” meant exactly that – someone had to stand next to the knife blade switch and lever it into the closed position. 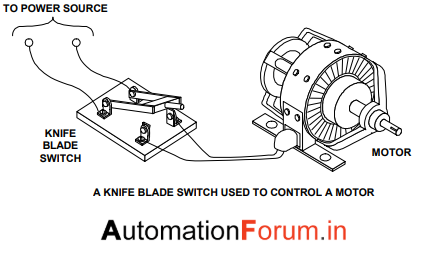 The engineers discovered that the contacts were wearing out quickly because humans could not Open and close the switch fast enough to avoid the electric arc. Arcing, a condition where the high voltage jumps through the open space when the contacts close or He pulled away from the switch, corroded the soft copper switches with pitting. Dirt and the humidity aggravated the problem. More importantly, as the engines became larger, the currents to operate them also had get bigger, creating a serious security problem. It was physically dangerous to operate the switch. The knife blade operators arranged became harder and harder to find

Mechanical improvements were made, but with their dangerous operation and short contactor life, knife blade switches remained at a design dead-end.

The manual controller was the next step up the evolutionary ladder, offering several important new features:

Double-break contacts open the circuit in two places simultaneously. Dividing the connection over two sets of contacts allows you to work with more current in a smaller space than you get with a single-break contact. In addition, the mechanical linkage more quickly and consistently opens and closes the circuit, sparing the metal from some of the arcing experienced under knife blade switches. 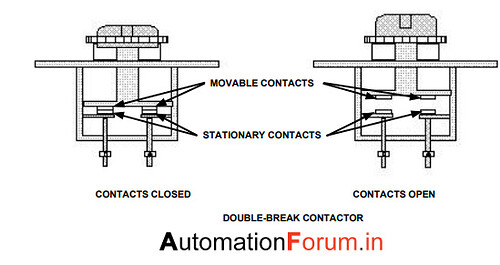 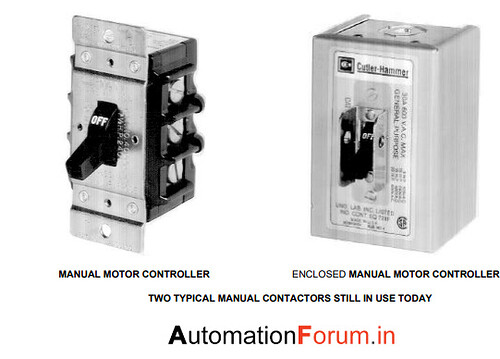 A magnetic contactor is operated electro mechanically without manual intervention. This means that the contactor can be operated remotely, without the need for putting a person in a potentially dangerous location. Magnetic contactors use a small control current to open and close the circuit. 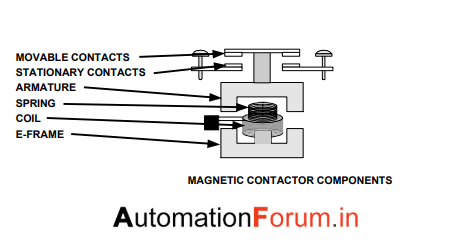 The E-Frame, when energized by the coil, becomes an electromagnet. The armature, a companion to the E frame, is connected to a set of contacts. The armature is moveable but is held by a spring. When the coil is energized, the moveable contacts are pulled toward the stationary contacts, because the armature is pulled toward the E-frame. Once the two sets of contacts meet, power can flow through the contactor to the load. When the coil is de-energized, the magnetic field is broken, and the spring forces the two sets of contacts apart.

Also read What is a switchboard and what is it used for?