Overload protection prevents an electric motor fromdrawing too much current, overheating, and literally burning out 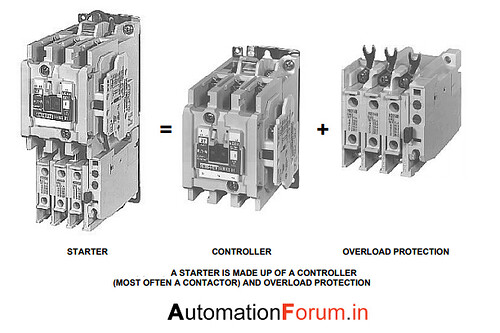 A motor goes through three stages during normal operation: resting, starting, and operating under load. 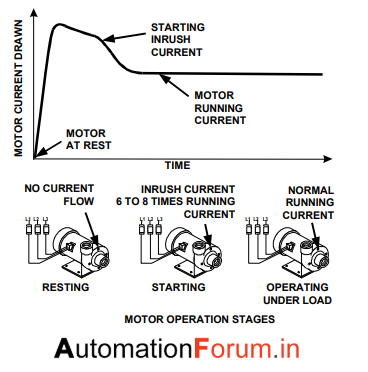 A motor at rest does not require current because the circuit is open. But once the circuit is closed, the motor starts generating a tremendous input current; up to 6-8 times its operating current. Here’s the problem: this large input current can cause the immediate trip of the circuit breaker. A fuse or circuit breaker sized to handle the normal operating load of the motor will open the circuit during start-up. You might think that sizing the fuse or circuit breaker for the peak in current consumption would solve the problem. But if you did this, once the engine was running, only the most extreme overload would open the circuit. Minor overloads would not trip the switches, and the motor would shut down 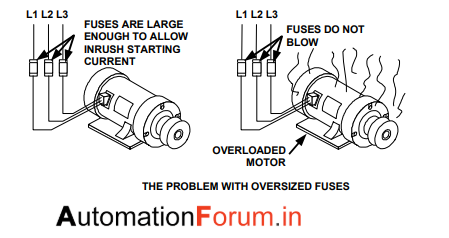 What Is An Overload?

Because of the way a motor works, an overload protection device is required that does not open the circuit while the motor is starting, but opens the circuit if the motor gets overloaded and the fuses do not blow.

The overload relay is the device used in starters for motor overload protection. It limits the amount of current drawn to protect the motor from overheating.

An overload relay consists of:

To meet motor protection needs, overload relays have a time delay to allow harmless temporary overloads without breaking the circuit. They also have a trip capability to open the control circuit if mildly dangerous currents (that could result in motor damage) continue over a period of time. All overload relays also have some means of resetting the circuit once the overload is removed

The fusion alloy (or eutectic) overload relay consists of a heating coil, a eutectic alloy, and a mechanical mechanism to activate a triggering device when an overload it happens The relay measures the motor temperature by controlling the amount of current that is drawn. This is done indirectly through a heater coil. There are many different types of heater coils available, but the operating principle is the same: a heater coil converts the excess current into heat that is used to determine if the engine is in danger. The magnitude of the current and the the time that is present determines the amount of heat registered in the heater coil. 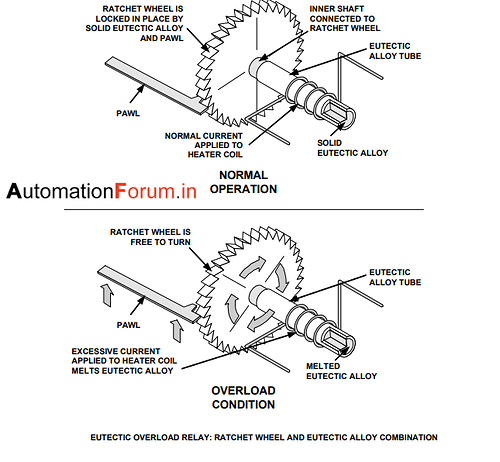 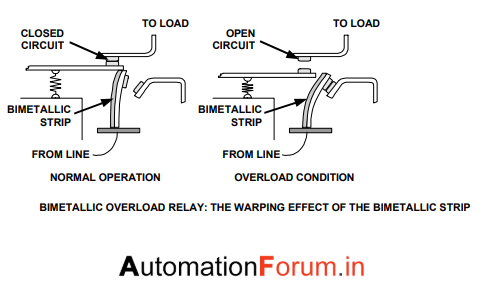 Once the firing action has taken place, the bimetal strip cools and reshapes in itself, automatically restarting the circuit. The motor restarts even when the overload it has not been erased, and it will fire and restart again and again. (This assumes an automatic restart This type of relay can also be equipped with a manual reset).

The current can be measured through current transformers, then it becomes a voltage which is stored in the memory inside the overload relay. If the relay notices that the the current is higher than it should be for a too long period of time, it shoots up. Another type of solid state overload relay uses sensors to detect the heat generated in the engine When the sensor also detects heat above the preset value for a long period of time, it shoots up.