What is Star Topology?

What is Network Topology?

Network topology is the physical or conceptual description of how links and nodes are connected to one another. A network’s configuration or topology is critical to its performance.

Network topologies are mainly classified into the following types.

Each has pros and cons and depending on your company’s needs, different arrangements can provide you with a higher level of connectivity and security.

In this article, we are going to discuss star topology.

What is Star Topology? 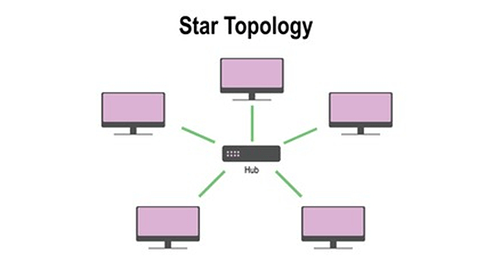 A star topology is a network topology in which each device in the network is connected to a central node known as the switch or hub. This topology resembles a star when represented visually, hence its name.

Remote branches in a star topology arrangement can safely communicate with the business headquarters or central site. Intercommunication between the branches, however, is not authorized. Such a configuration could be used in a bank network to ensure that the compromise of one branch does not instantly lead to the compromise of another without being detected. To acquire access to a second branch, the attacker must first compromise the core network, which should be capable of detecting such an attempt. Star topologies offer the intrinsic advantage of allowing for the addition of new sites with simplicity; just the central site must be modified.

What is the mechanism of Star Topology?

In this design, the central switch follows a Content Addressable Memory (CAM) table. The switch’s memory stores the hardware addresses of all linked computers. The message is sent to the switch by the sender’s computer. The switch retrieves the destination address from memory and forwards the message to the destination computer.

Where is the star topology used?

The star topology is utilised with caution in the Local Area Network (LAN). Almost all network setups, even small residences, and workplaces choose a star topology. Users link their mobile phone, laptop, tablet, smart TV, and so on to the router in the home network to gain Internet access.

Various types of Mitsubishi PLC controllers and it software features

Advantages and Disadvantages of Star Topology