Network topologies connect individual devices. Such connections allow the devices to share and exchange information. The most frequently used in the process industries are the star, the bus, and the ring network systems.

In a star topology, each device is connected by a point-to-point link to a central hub that acts as the single switching device.The communication processing load is on that central hub. When a device wants to transmit data, it first sends a request to the central hub asking for a connection to a specific destination. Once the link is set by the central hub, data is exchanged between the two devices as if they were connected on a point-to-point link. The star topology is the most simple and least costly of the three topologies. Each device operates independently and loss of communication between a node and the central hub does not affect other nodes. Star topologies typically have no redundancy. 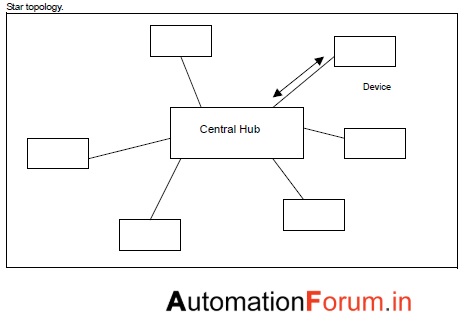 In a bus topology, also known as a multi-drop topology, all devices are connected to a passive link (or bus), basically a cable . All devices on the network listen to all messages but a device will respond only to the messages addressed to it. 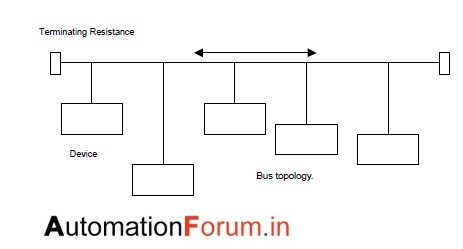 Bus failure will affect communication and therefore redundant buses are sometimes used. Since all devices on the bus share this common transmission link, only one device can transmit at any one time. Each device wishing to transmit data has to wait for its turn and then transmit. The receiving device recognizes its address from the traveling packet and copies it. This topology is very flexible and can handle a large number of devices with a variety of data types and data rates. However a cable break disables a large portion of the network.

In a ring topology, also known as loop topology, repeaters are connected to each other in point to- point links. Therefore, each repeater is connected to two other repeaters. Data is transmitted in packets circulating in one direction . Each packet contains the destination’s address, some control information, and data to be transmitted. Each device attaches to a repeater. The ring topology provides excellent throughput, however it is limited to the number of devices on its network. Where redundancy is required, a second ring is implemented and communication moves in the opposite direction. 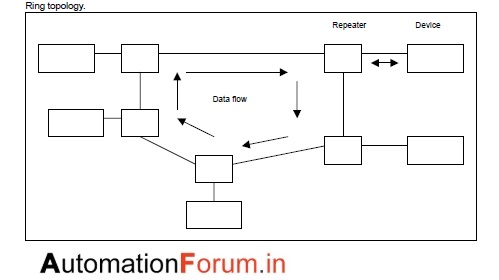