Secure Shell is an internet security cryptographic component. SSH and SFTP were developed by the Internet Engineering Task Force (IETF) to improve web security. To avoid password sniffing and exposing sensitive information in plain text, SFTP transfers files securely using SSH and encrypted FTP commands. SFTP protects against man-in-the-middle attacks because the client must be authenticated by the server.

SFTP is useful in any situation where sensitive data must be protected. Trade secrets, for example, may not be covered by any specific data privacy rule, but they can be disastrous if they fall into the wrong hands. As an example, a business user might use SFTP to send files containing trade secrets or other sensitive information. A private user may also wish to encrypt his or her communications.

How does SFTP works? 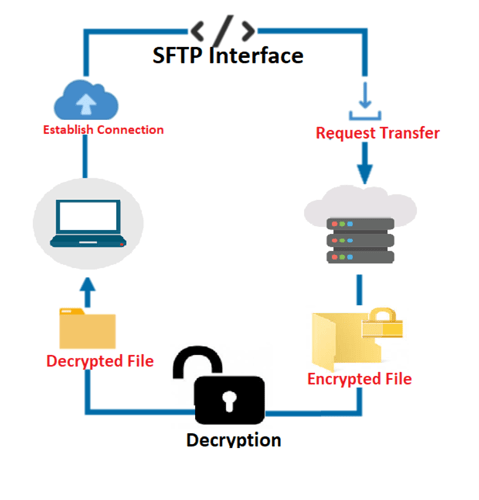 The Secure File Transfer Protocol was designed to transfer and manage files securely over a TCP/IP network. SFTP employs the same commands as standard File Transfer Protocol (FTP), and the majority of SFTP commands are similar or identical to Linux shell commands. SFTP can transfer sensitive files, delete files, and resume paused transfers, among other things. SFTP only needs to be connected to the standard SSH port 22 to establish server connections.

An SFTP client and server are also required. An STFP client is software that allows users to connect to and store files on a server. The STFP server stores and retrieves files. When a user clicks on a file, the request is routed through the network and eventually arrives at a server. This information is then transmitted to the requesting device. Before transferring files, SFTP ensures that they are encrypted.

SSH keys are commonly used in scripts, backup systems, and configuration management tools to automate server access. In SFTP, half of the SSH key is stored on the client device, while the other half is stored on the server associated with a public key. When SSH key pairs match, users are properly authenticated.

To establish a secure connection, SFTP uses an SSH data stream. Encryption algorithms safely transfer data to a server while rendering files unreadable in the process. Authentication is also enabled to prevent unauthorised file access. Users can be identified using a user ID and password, SSH keys, or both.

When to use SFTP?

As the successor to FTP, SFTP is used in situations where file security is critical, such as when complying with security and privacy standards such as HIPAA, CCPA, or GDPR. SFTP can be extremely useful for protecting sensitive and confidential data in transit.

This is especially important in remote working environments. For example, any doctor or third party working with a hospital or healthcare provider must always keep electronic PHI (ePHI) confidential, including during network transfers. SFTP is one of several options for protecting that data during transfer, ensuring that criminals do not compromise its confidentiality and integrity and that the company does not unintentionally violate HIPAA.

SFTP can also be used in conjunction with a VPN. Both systems will safeguard data, but they are not identical. SFTP is a protocol, whereas VPN is a data tunnel that is secure and encrypted. Keeping this in mind, data can also be sent using the SFTP protocol via a VPN, making the transfer even more secure.

SFTP is also an improvement over FTPS, which is simply an FTP protocol over TLS/SSL. Because ports 989 and 990 must be open, FTPS necessitates complex firewall configurations, relies on a centralised public certificate authority, and is prone to file corruption because it defaults to ASCII mode.

Advantages and Disadvantages of SFTP

The advantages of SFTP include the following:

The disadvantages of SFTP are