What is an encoder

Encoders are sensors that generate digital signals in response to movement. It can convert a motion to an electrical signal and then it can be read by a control device. Encoder technologies are used to create signals such as mechanical magnetic, resistive and optical. The most common technology employed by encoders is optical, encoders produce either incremental or absolute signals.

What is rotary encoder

It is an electromechanical device which is used to convert the angular position of a shaft or axle to a digital code. It is similar to a potentiometer in form factor, but without a rotational stop, its shaft can be rotated clockwise or anticlockwise many times. Rotary encoder has many applications they are motor control, angular or position measurement. Most common types of rotary encoders are absolute and incremental rotary encoders. There are other types of rotary encoders which is classified according to the number of pulses, positions or steps per revolution 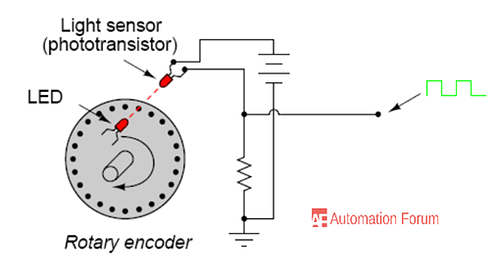 This type of encoder provides a series of high and low waves which will indicate the position movement from one position to the next. These devices provide a series of periodic signals in the form of pulses due to mechanical motion of shaft revolution. Speed of an object can be measured by counting the pulses for a period of time. Pulses can be counted from a reference point to calculate the angle or distance covered. The incremental rotary encoder produces two digital output signal the phase relationships between these two sensors determine whether the shaft of the encoder is rotating clockwise or anti-clockwise. Position can be determined by this type of encoder

When the LED emits the light then it will pass through a transparent disk patterned with opaque lines. A sinusoidal waveform is produced when the photo-sensor receives the light beam, which is transformed into a square wave or pulse train. The pulse signal is sent to the counter or controller which will then send the signal to produce the desired function.

This type of encoder uses a unique word for each position, which means that it can provide both the indication that the position has changed and an indication of the absolute position of the encoder. Information is provided in a unique output for every movement of the shaft rotation, each position is represented by gray codes. The absolute encoder has certain advantages over the incremental type, the position is maintained after a power down and the absolute position is recovered upon power-up without any home cycle or shaft rotation. Incremental encoders provide

thanks for information about encorders

I heard that baumer rotary encoders are widespread in industry. Such sensors determine current degree of shaft displacement at any time (so-called absolute position). I found good supplier of this tool on https://eltra-trade.com/catalog/baumer-absolute-encoders