As we all know 4-20mA signal is widely used in process industry, majority of transmitters, controllers work in this signal range. That means a perfectly working equipment will transmit signal with in 4-20mA range and a variation higher or lower to this range means fault in the loop.

NAMUR NE 43 is the standardization of such fault signal information.

As above said NAMUR NE 43 gives clarity on how a sensor fault can be indicated to the control system by means of the same 4-20 mA.

NAMUR NE 43 can be defined as: 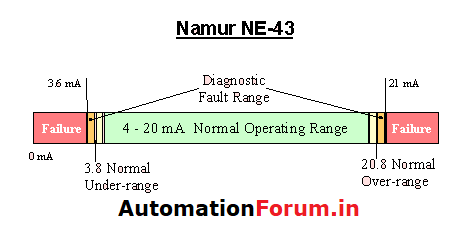 The can be two reasons why a transmitter shows a valve above or bellow the range:

Process Variable has gone under-Range or Over Range:

For a normally operating instrument the output should stay between 4-20 mA. But in some exceptional scenarios process variables itself may deviate above the range (above 20mA) which is over range. For example a tank is overfilling.

According to NAMUR NE 43 standard an over range situation shows transmitter output up to a maximum of 20.5 mA. 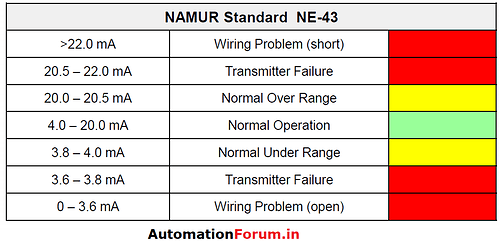 The same situation can occurs at the bottom of the measuring range. The process’s low range value usually corresponds to 4 mA after calibration, but the output signal can drift within a few years, causing the transmitter to only send 3.9 mA.

Transmitter failure can be caused because of sensor or converter failure.When these errors occur, smart instruments will adjust the output signal to 3,6mA or 21,0mA, based on how the user set the fail-safe mode.

Now a days there are many transmitters and equipments that are set fail safe mode according to NAMUR NE43 standard and also let you allow to choose between down scale and upscale failure mode.

There is only 0.2mA gap between the medium saturation area’s 3.6mA downscale signal rate and the higher saturation area’s 3.8mA start value as a 2-wire transmitter needs the current below 3.6mA for its proper operation. Many suppliers also have equipment that uses less than 3.6 mA.

How fault signal interpret the alarm:

As per the concept of 4-20mA signal, it is impossible to occur signal between 3.6-3.8 and 20.5 - 21.0mA. But if it comes the controller should interrupt as a measurement signal.

There shall be a hardware error signal for at least 4 seconds and at least 2 signal scanning cycles before it is perceived as a sensor fault.