What is machine vibration

Vibration can be described as the oscillation or repetitive motion of an object around an equilibrium position. The equilibrium position is the position the object will attain when the force acting on it is zero and this type of vibration is called “whole-body motion” in which all parts of the body will move together in the same direction at any point in time.

What is complex vibration 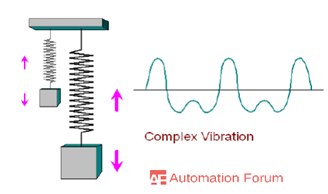 A complex waveform is created by the combination of the low and high-frequency vibration, in cases like this it is easy to find the frequencies and amplitudes of the two components by examining the waveform, but most of the vibration signals are complex than this and is extremely difficult to interpret.

Repeating forces in machines are mostly because of the rotation of the unbalanced, misaligned, worn, or improperly driven machine components.

Unbalanced machine components contain ‘heavy spots’ which will exert a repeating force on a machine when it is rotated. Unbalance can be caused by matching errors, non-uniform material density, variation in bolt sizes and air cavities in cast parts…

Misaligned machine components create bending moments which when rotated exerts a repeating force on the machine. Misalignment can also be caused by inaccurate assembly, uneven floors, thermal expansion, distortions due to fastening torque, and improper mounting of couplings

A repeated force will be exerted on machines when a worn machine component is in a running state and it is because of the rubbing of the uneven worn surfaces. Wear in roller bearings, gears, and belts are due to improper mounting, poor lubrication, and overloading.

Improperly driven machine components will exert a repeating force on the machine because of intermittent power supply, pumps receiving air in pulses is an example