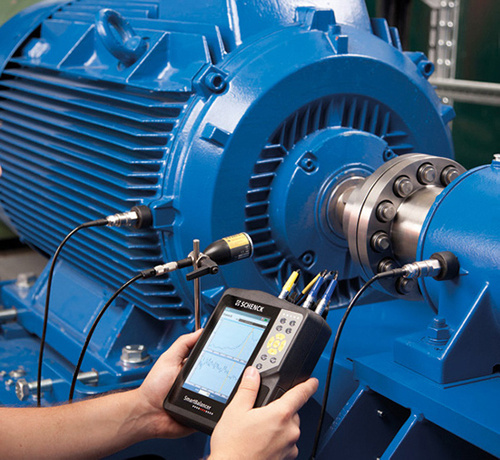 Vibration monitoring is a common maintenance procedure. Vibration analysis is a powerful tool for evaluating the state of machinery and avoiding unexpected faults.

Motors must be adequately regulated to ensure compliance with those vibration rates. Vibration is actually created by forces that result from the uneven distribution of a moving body’s mass. The equilibrium method aims to improve the distribution of mass, thus reducing unbalanced forces which may be counterproductive to the machinery.

A rigid and massive foundation is ideal, as it minimizes the observed background vibration at the engine or other equipment. A solid foundation is less active, thus limiting the total movement of the system and therefore the vibration level of the machine due to its own mass and rigidity.

Just as critical as the foundation itself is how the machine is connected to the foundation. Induction motors are usually fitted with instruction books to help ensure the unit is maintained according to the instructions of the manufacturer.

Bolting: The bolts used to attach the engine to the base via the motor feet are one of the most basic items when mounting the motor. Though these are basic in design, they seem to be troublesome. Ensure the bolts are sized in accordance with the manufacturer’s recommendations and verify all of the foot mounting bolts are properly torqued.

Shims: Shims, another fairly basic element that often creates a number of problems, is meant to fix the poor foot as well as to change the orientation of the unit. Shims should cover as much of the foot surface as possible and be as thick as practical for the requirement, making sure to use the smallest amount of shims.

Soft foot: Soft foot can play a major role in an induction motor’s vibration. Even though any motor may be adversely affected, 2-pole devices are particularly vulnerable to weak foot problems owing to their design’s erratic electromagnetic forces within the air gap.

Rotor critical speed - Coast-down monitoring can be used to evaluate natural device frequencies but this technique is most widely used to calculate critical rotor speeds. With very few examples, rotor critical speeds are only a concern when dealing with certain 2-pole (and sometimes 4-pole) rotors.

Natural frequencies/bump test - Normal frequencies from the system can also be quite dangerous because they overlap with frequencies pressuring the system. Suspect this type of problem where vibration on one axis is much stronger than on another, or when the frequency does not seem to be disturbed, regardless of the corrections made.

The best data for determination of a system natural frequency is provided via dual-channel impact testing using an instrumented modal hammer and a vibration transducer.

A frequent source of mechanical unbalance with engine startups derives from inadequate connecting hubs main trimming. For the shaft section where the coupling hub is located, the optimal key design uses a full key and then steps down to a half key.

A large mechanical unbalance is created by using a complete key that does not step down to a half key. Please follow the advice of the manufacturer to achieve best results.