Li-fi is the transmission of data through illumination, it is done by taking the fiber out of fiber and by sending data through a LED light bulb. This varies in intensity faster than a human eye can follow. It can be considered as the fastest and cheapest wireless communication system which is an optical version of Wi-fi. 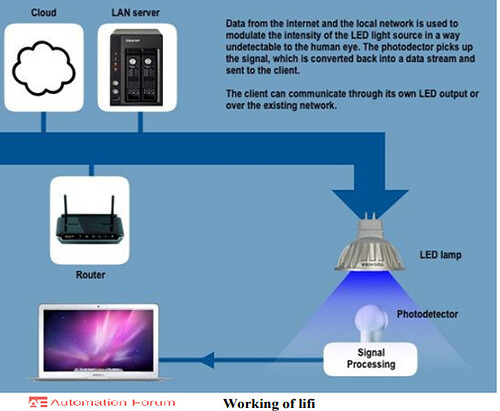 What are the advantages of Li-fi over wi-fi

Li-fi has the advantage of being able to be used in electromagnetic sensitive areas such as in aircraft, nuclear power plants and oil gas installations it is used in these areas because it won’t create any interference. This is a free band and it doesn’t need any license, because of that it is cheaper than wi-fi. Another advantage is that the visible light spectrum is larger than the radio spectrum and it will provide better flexibility in its use, this can be considered as a secure way of communication because optical wave doesn’t pass through walls and its communication speed is very high it’s almost 1GB per second

Li-fi uses a white LED light bulb for data transmission, mostly these devices are used for illumination by applying a constant current. The optical output can be made to vary at high speeds by fast and subtle variation of the current. This property is used in Li-fi its working is very simple, if the LED is on then a digital 1 is transmitted if it is off then 0 is transmitted, LED can be switched on and off very quickly and this gives a better opportunity for data transmission, so the required components will be some LED’s and a controller which will code data into those LED’s and the process which needs to be done is to vary the rate at which the LED’s flicker depending upon the data we need to encode

Why are we using visible lights for this technology

There are many waves like radio waves they are infrared, visible, ultraviolet, x-rays and gamma rays. The advantage of selecting visible light for this technology is because other waves have many limitations like radio waves are little expensive and has little bandwidth, it is not secure too. Infrared cannot be used for video streaming, x-rays and ultraviolet rays cannot be used because it is harmful to the human body and gamma rays are very costly. The bandwidth of visible rays is 10000 times than of the radio and they are secure too.

What are the advantages of Li-fi

What are the limitations of Li-fi

Light can’t pass through objects, interference from other light sources such as sunlight, normal bulbs, and opaque materials in the path of the transmission will cause an interruption in the communication. High installation cost, another challenge which li-fi faces are how the receiving device will transmit back to the transmitter. Li-fi transmission needs line of sight so while setting it in outdoors it would have to deal with ever-changing conditions and in indoors it would not be able to shift the receiving device.

What are the applications of Li-fi

I’ve never heard of Li-Fi before. Guess we learn something new everyday.