What is ELCB and the advantages of ELCB? 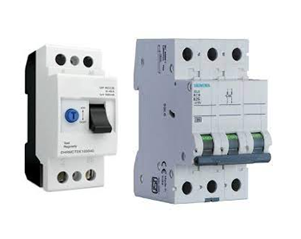 What is earth leakage?

Earth leakage is the flow of electrical current from a live conductor to the earth via an unintended path. It may flow between their inadequate insulation or through a person’s body, resulting in electrical shock. If the leakage current exceeds 30mA, the result of an electrical shock can be fatal. When such current leakage is detected, protection devices are used to disconnect the power source.

An electrical circuit breaker is a type of latching relay that has the main supply of buildings connected through its switching contacts so that when earth leakage is detected, the circuit breaker will disconnect the power. The fault current from live to the ground wire in the fitting it protects can be detected using this. If sufficient voltage is applied across the circuit breaker’s sense coil, it will shut down the power and remain off until physically reset. Fault currents are not detected by an ELCB that is used for voltage sensing.

The main function of an earth leakage breaker or ELCB is to prevent electric shock when electrical installations pass through high-ground impedance as they are safety devices. These circuit breakers detect small stray voltages on top of metal-enclosed electrical equipment and break the circuit when hazardous voltages are detected. The main purpose of ELCB is to prevent harm to people and animals due to electric shock.

Every electronic device should be earthed in accordance with international standards. It will eliminate the risk of electrocution. We must bury a metallic rod deep in the soil, with an ELCB connected between the wire coming from the rod and the wire attached to the external metallic body of the electric device, or the ELCB is connected to the earth wire.

Voltage ELCBs were in full-size use on the grounds that then, and plenty of are nevertheless in operation however are now not set up in new construction. Voltage Controlled ELCBs detect the potential for upward impact between a covered interconnected metal structure (system frame, conduit, housing) and a remote ground reference electrode. They function at a detected capability of around 50 volts to open the primary breaker and isolate the delivery from the covered premises.

We can connect remote reference earth connection by using a second terminal in voltage-operated ELCB.

A voltage difference appears across the terminals of the coil if the live wire breaks or its insulation fails and comes into contact with the body of the equipment. As a result, the current begins to flow through the coil, and it becomes energized. The relay begins to produce electromagnetic force. When the current exceeds a certain threshold, the relay generates enough force to pull the latch. The latch break opens the contacts, disconnects the power supply to the equipment, and prevents electrical shock.

When a fault occurs, a small current flows to the ground as well. This causes a current imbalance between the line and neutral currents, resulting in an unbalanced magnetic field. This causes a current to flow through the secondary winding, which is linked to the sensing circuit. This will detect the leak and send a signal to the tripping system.

The RCCB operates on the principle of Kirchhoff’s Current Law, which states that the amount of current entering the load through the hot wire must equal the amount of current leaving the load through the neutral wire. The difference between the two currents, known as the residual current, must be zero. If there is a difference, the current will flow somewhere and an imbalance will occur.

The RCCB contains a zero-sequence current transformer with three coils: a phase coil, a neutral coil, and a search coil. It is used to detect an imbalance or difference between two currents. The phase coil and the neutral coil are wound on a toroidal core in such a way that they compensate for each other’s currents.

If the currents are the same, the resulting fluxes cancel each other out and there is no induced current in the search coil as in normal conditions. Assuming there is a leakage current, the current difference creates a magnetic flux that induces a voltage in the search coil. As the search coil is connected to the relay trip mechanism, the contacts open and the load is de-energized.

Types based on Poles

It has two terminals for both ingoing and outgoing for the phase and neutral connections and it is mainly used to give protection of a single-phase system.

3-Pole ELCB: 3 pole ELCB is used to protect the three-wire three-phase system and it consists of three incoming and three outgoing terminals. 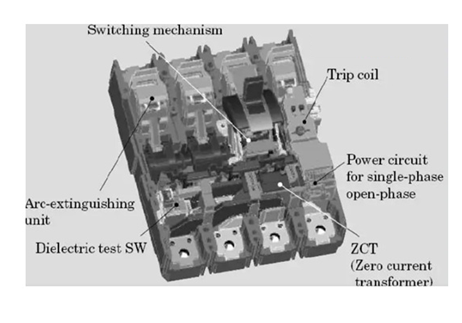 What are the replacements for ELCB?

Fuse, MCCB, RCCB, ELCB are the main alternatives to MCB