What is Domain Name System (DNS)? 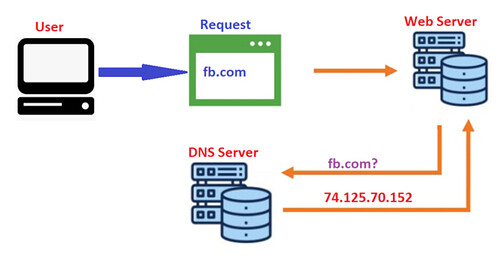 Each Internet-connected device has its own IP address, which other machines can use to find it. DNS servers reduce the requirement for humans to remember IP addresses like 192.168.1.1 (in IPv4) or more complex modern alphanumeric IP addresses.

How does DNS work?

When your computer needs to find the IP address associated with a domain name, it first uses a DNS client, which is usually a Web browser. After that, the query is routed to a recursive DNS server, also known as a recursive resolver. A recursive resolver is often managed by an Internet Service Provider (ISP) such as AT&T or Verizon (or another third-party), and it knows which additional DNS servers to query in order to resolve a site’s name with its IP address. The authoritative name servers are the servers that truly contain the required information.

DNS is structured in a hierarchical manner. A recursive resolver is queried for the first time for an IP address. This query first takes you to a root server, which has information about top-level domains (.com, .net, .org) as well as country domains. Because root servers are located all over the world, the DNS system routes requests to the closest one.

When a request reaches the correct root server, it is sent to a top-level domain server (TLD nameserver), which maintains information for the second-level domain, which is the words entered into a search box. The request is then sent to a domain nameserver, which looks up the IP address and returns it to the DNS client device, allowing it to access the proper website. All of this happens in milliseconds.

What is the DNS numbering system?

Every device that connects to the internet need a unique IP address in order for traffic to be routed properly to it. DNS uses an IPv4 or IPv6 system to convert human inquiries into numbers. Numbers in IPv4 are 32-bit integers expressed in decimal format.

The string of numbers is broken into pieces that include the network component, the host, and the subnet, much like a phone number with a country code, an area code, and so on. The network component of the number specifies the network class and category to which the number is assigned. The host identifies the individual network machine. The subnet element of the number is optional; however, it is used to navigate a local network’s sometimes extraordinarily high number of subnets and other partitions.

DNSSec is a security protocol developed by ICANN (Internet Corporation for Assigned Names and Numbers) to improve the security of communication across the various layers of servers engaged in DNS lookups. It fixes flaws in DNS top-level, second-level, and third-level directory server connectivity that could allow hackers to hijack lookups.

This hijacking enables attackers to reply to genuine site lookup queries by redirecting users to a malicious site. These sites may distribute malware to users or conduct phishing campaigns.

DNSSec addresses this by requiring each level of DNS server to digitally sign its queries, guaranteeing that end-user requests are not hijacked by attackers. This establishes a chain of trust, ensuring that the request’s integrity is checked at each level of the lookup.

DNSSec can also determine if a domain name exists and, if it does not, prevents a fake domain from being provided to innocent requesters attempting to resolve a domain name.

IPv6, which was developed in response to worries about the internet running out of IPv4 addresses, employs 128-bit numbers as opposed to 32-bit numbers in IPv4. There are 340 trillion IPv6 address possibilities.

What are the four DNS Servers?

DNS recursor: - Consider the recursor to be a librarian who is asked to locate a specific book in a library. The DNS recursor is a server that receives queries from client machines via applications like web browsers. The recursor is then often responsible for making further requests to satisfy the client’s DNS query.

Root Nameserver: - The root nameserver is the initial stage in translating (resolving) human-readable host names into IP addresses. It’s similar to a library index that links to different book racks - normally, it serves as a reference to other more particular locations.

TLD Nameserver: - Consider a top-level domain server (TLD) to be a distinct shelf of books in a library. This nameserver is the following step in the search for a certain IP address, and it hosts the final portion of a hostname (the TLD server in example.com is “com”).

The DNS resolver is the first stop in the DNS lookup and oversees dealing with the client who initiated the request. The resolver initiates a series of queries that results in a URL being translated into the required IP address.

What are the different sorts of DNS queries?

A typical DNS lookup involves three sorts of queries. By merging these requests, an effective DNS resolution mechanism can result in a reduction in the distance covered. Cached record data would be available in an ideal world, enabling a DNS name server to answer a non-recursive query.

There are three types of DNS queries:

Recursive Query: - A DNS client expects a DNS server (typically a DNS recursive resolver) to respond with either the requested resource record or an error message if the resolver is unable to discover the record in a recursive query.

Non-recursive Query: - When a DNS resolver client queries a DNS server for a record that it has access to, either because it is authoritative for the record or because the record is in its cache, this happens. A DNS server would often cache DNS records to save bandwidth and put less strain on upstream servers.