What is Building automation system (BAS)?

What is the Building Automation System (BAS)?

BAS is an example of DCS. Building automation defines the control system’s features. The control system is a computerized, intelligent electronic device network designed to monitor and control a building’s mechanical and lighting systems.

BAS core functionality maintains the building climate within a specified range, provides occupancy-based lighting, and monitors system performance and device failures, and provides engineering staff with email and/or text notifications. A building controlled by a BAS is often referred to as an intelligent building system. 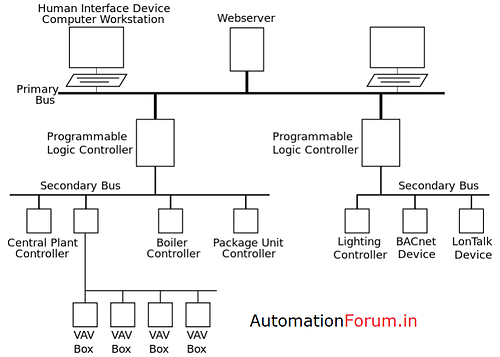 Controllers used in BAS are used for specific applications, each organization has its own controllers. Some have limited controls: a simple Packaged Roof Top Unit, for example. Others are built for versatility.

Inputs and outputs are either analog or digital. Analog inputs are used to interpret a calculation of the parameter. Examples are the thermistor temperature, humidity and stress detector, 4-20 mA, 0-10 volt or platinum resistance thermometer.

A electronic output shows whether or not a system is turned on. A 24VDC / AC signal, an air flow switch, or a volt-free relay touch would be some examples of a digital output.

The controller used usually consists of one or more PLC (Programmable Logic Controllers), with certain programming. PLC in BAS is used to control equipment that is normally used in a building.

Occupancy is usually based on the time of the daily schedule. Override switches or sensors can be used to monitor occupancy in several internal areas of the building.

To trigger lighting and/or air conditioning, some buildings rely on occupancy sensors. Given the potential for long lead times before a room is sufficiently cold or hot, it is not always specifically activated by an occupancy sensor.

Lighting can be turned on or off with the Building Automation System based on daily time, or a timer and sensor. A simple example of such a system is lighting a lamp in a room after half an hour the last person exits the room.

Air handlers are used to regulate the entry and exit of air in the building. This arrangement is done to keep the air in accordance with the needs and human health in the building.

It is possible to place analog or digital temperature sensors in space or room, return and supply air ducts, and sometimes external air. Actuators are placed on hot and chilled water valves, external air and air dampers return.

A “Constant Volume Air Handling Unit,” or CAV, is the less effective type of air handler. There are no variable speed sensors for the fans in CAVs. Instead, to maintain temperatures in the spaces of the building, CAVs open and close dampers and water supply valves. By opening or closing chilled or hot water valves which feed their internal heat exchangers, they heat or cool the spaces.

Many Building Automation Systems have alarm capabilities. If an alarm is detected, the alarm can be programmed to notify someone. Notification can be done through a computer, pager or alarm sound. Security systems can be connected to building automation systems. If an occupancy sensor exists, it can also be used as a burglar alarm.