A transformer is a power converter that can transfer energy between two electrical circuits by inductive coupling between two or more windings. The transformer plays a major role in the power system, the transformer has made it possible that the power generated at low voltages for transmission over a long distance.

A transformer changes voltage by means of mutual electromagnetic induction, the electrical current in the primary coil is used to create a magnetic field. Changes in current will result in changes in the magnetic field, and it will alter the voltage of the secondary coil or circuit. Mostly transformers are used to convert one voltage to others. The process of increasing the voltage is called stepping up while decreasing the voltage is called stepping down, the most electronic device needs a transformer to lower the main voltages to a usable level. Transformers can minimize energy loss during long-distance electricity distribution.

What is an autotransformer 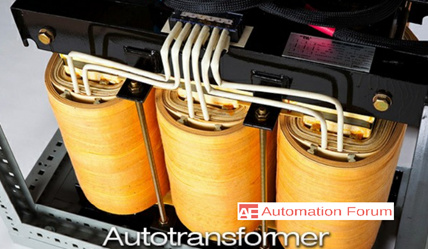 What is the difference between autotransformer and normal transformer

How to construct an autotransformer and how does it work

Autotransformer consists of a single copper wire common to both the primary and secondary circuits. The copper wire is wound over a silicon steel core, mostly three taps are provided over the windings which will provide three levels of the output voltage. By providing a smooth sliding brush over the winding we could obtain a variable turn ratio. The primary and secondary windings are connected electrically as well as coupled magnetically and this would make the autotransformer cheaper, smaller, and more efficient

In an autotransformer, energy is transferred mainly through the conduction process and only a small part is transferred inductively. Voltage per turn is the same for the primary and secondary so the voltage can be easily varied by varying the number of turns. Load connection is done by connecting one of its terminals to one of the tappings and the neutral is connected to the other one. An autotransformer has a single winding with two end terminals and one or more terminals at immediate tap points. The primary voltage is applied across the two terminals and the secondary voltage will be taken from the two terminals, almost always having one terminal in common with a primary voltage. The primary and secondary circuits will have a number of windings that turn in common. The volts per turn are the same in both windings so each will develop a voltage which is in proportion to its number of turns. In this transformer part of the current flows directly from the input to the output, and an only small part is transferred inductively

What is a variable autotransformer

A variable autotransformer is used when we need to get a variable AC voltage from a fixed voltage source. The transformer is composed of a single layer winding wound uniformly on a toroidal iron core, a movable carbon brush in sliding contact with the winding serves as a variable tap. When the brush slides over the bared portion of the winding, the secondary voltage increases in proportion to the number of turns swept out. The input voltage is connected to the tap on the winding. Variable autotransformers are efficient and provide good voltage regulation under variable loads.

What are the advantages of autotransformer

What are the disadvantages of autotransformer

What are the applications of autotransformer