What is a Solenoid valve and How it works?

What is a Solenoid Valve? 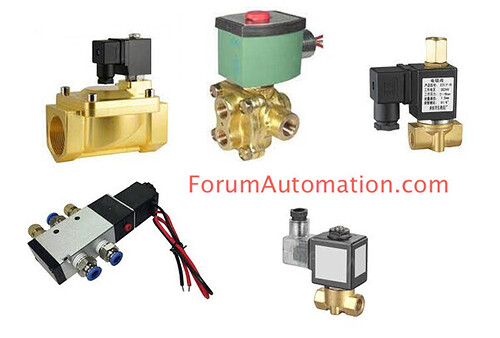 A solenoid valve is an electromechanically operated valve that converts electrical energy to mechanical energy, thereby creating a magnetic reaction. A solenoid is a group of coiled wires that act as an electromagnet when a current passes through it. It converts linear mechanical motion from electrical energy. Because coiled wire has a great application, people often think that the solenoid is electromagnetic. Electromagnets have a special use because they can be switched on and off as needed. In addition, they can be strengthened by increasing the current flowing through the coil.

Also read: What are the types of Solenoid?

Also read: What is the difference between AC and DC Solenoids?

A solenoid is a long wire, wound with a helical pattern, usually surrounded by a steel frame, with a steel core inside the winding. When carrying a current, the solenoid becomes an electromechanical device in which electricity is converted into mechanical work. The core of a solenoid is usually made up of two sections and is movable

The actuator, or plunger, is a fixed end core or backstop.

The plunger is free to move in the Center of the winding in a linear direction. When the coil is ignited by an electric current, a magnetic force is created between the plunger and the end core, causing the plunger to move. The high permeability of steel, improved performance.

How a Solenoid Valve works?

Inside the solenoid valve, there is a closed chamber and ventilation holes at different locations. Each hole is connected to different oil pipes. There is a piston in the middle of the chamber. Both sides are two electromagnets. The electrifying magnetic coil pulls the valve body to its side so that different oil lets can open or close the valve body by controlling the movement.

However, the oil inlet is constantly open. Hydraulic oil enters different draw-off pipes. Oil pressure is used to drive the piston of the oil cylinder, which drives the piston rod and then the mechanical device. In this way, the mechanical movement of the solenoid valve is controlled by controlling the current. In addition, we will briefly study the working principle of two main types of solenoid valves.

The versatility of solenoid valves is one of their main advantages. They are suitable for a wide range of liquids and gaseous media and can be used in a variety of industries and applications. In comparison to other valves, they are also a very efficient way of controlling flow because they require very little wiring, expense, and effort.

The biggest disadvantage of a solenoid valve is its ability to handle dirty or contaminated liquids or gases. Foreign contaminants will collect in the parts of the solenoid valve and interfere with operation. It is also important to apply the correct voltage to these valves.