What is a position sensor and what are their types

What is a position sensor

How do position sensor work

What are the types of position sensor

LVDT is a linear position sensor, and it can measure small movements. LVDT has a single primary winding and two secondary windings. These windings will be wounded on a cylindrical bobbin and it is a non-magnetic insulating material. The secondary windings are placed on either side of the primary winding and the primary winding is connected to an AC source. In the bobbin, there is a movable soft iron core which would help to measure the movement. This method is very accurate and reliable, LVDT is fixed in a place and the ferrous core is attached to the moving element on the piece of equipment for position feedback.

It is a simple device which can be used to measure the position, these are mostly used in robots. It will check the angular and linear position. This device can be constructed by winding a resistive element in a coil configuration. While applying the DC voltage across the entire resistance, the output voltage is proportional to the linear or rotary distance of the sliding contact from the reference point. The potentiometer is a non-optical position sensor. 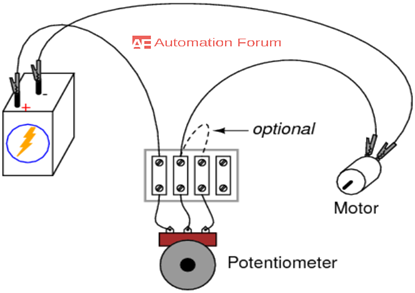 The optical method can be used to measure the distance traveled, and it won’t have problems related to mechanical switches. A transparent disk will be placed between the light emitter and a light receiver or sensor and the transparent disk would have one dark sector. A binary signal is used to detect the endpoint of the travel.

The proximity sensors can detect the presence of an object without any point of contact. This device won’t have any contact between the object and the sensor. These sensors have a long life, high reliability. There are many types of proximity sensors such as inductive proximity sensors, capacitive and ultrasonic, photoelectric and hall effect sensors. A proximity sensor emits an electromagnetic field and waits for the return signals or changes in the field.

Resolvers are similar to synchros, they can provide accurate angular and rotational information. They are widely used for factory applications and they are small in size. High accuracy and long term reliability. Absolute position measurement is possible by this, this device can be used for angle measurement and positioning.

Inductive sensors have more than one coil with variable inductance. The principle of this sensor is that it influences the quality to be measured by the inductance of the coil. Change in inductance can be measured by using a suitable measuring bridge. Inductive proximity sensors can be used to measure the distance between the sensor and an approaching object and they can be used for distance measurement.